Digging through the Archives, how I wish they were made differently

In 2011 Topps issued a release called Lineage.  It featured active and retired players on a new design.

The set also showed the lineage of Topps by revisiting some of the more popular designs and creating insert sets around them.  The fans loved the idea and Topps never produced Lineage again.

Well not under the title of Lineage that is.

Beginning in 2012 Topps would go into their archives and create a set called Archives.  Each year Topps would utilize 3-4 different designs from their cardboard making history and feature players on a design (mostly from their non playing days).

I have at minimum every base card of Andrew McCutchen from the Archives release and today I am going to post a series of designs I wish that McCutchen was used for over the first 8 years of existance of the brand. 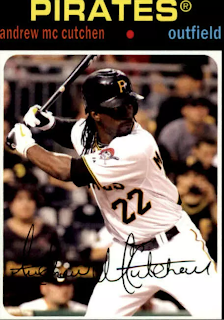 While I like the design of 1971 and it is nice to have Cutch wearing the black and gold in a design from the year the Buccos won a World Series, I knew Cutch would eventually get the 1971 cardboard treatment in 2020 Topps Heritage. 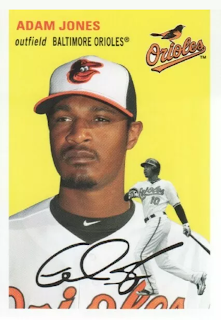 Here is his Team USA teammate Adam Jones on the 1954 design. 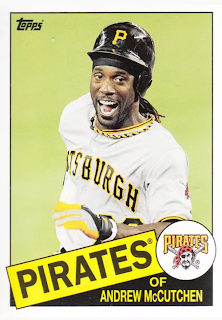 I am ok with this selection, but if I was given a choice of another design, I would lean towards 1990.  I don't see 1990 Topps as being a popular set by fans and can't imagine Topps using the design again until 2039 Topps Heritage. 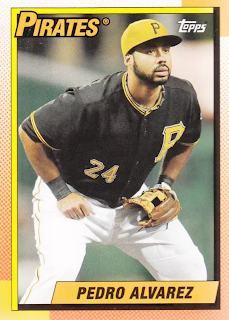 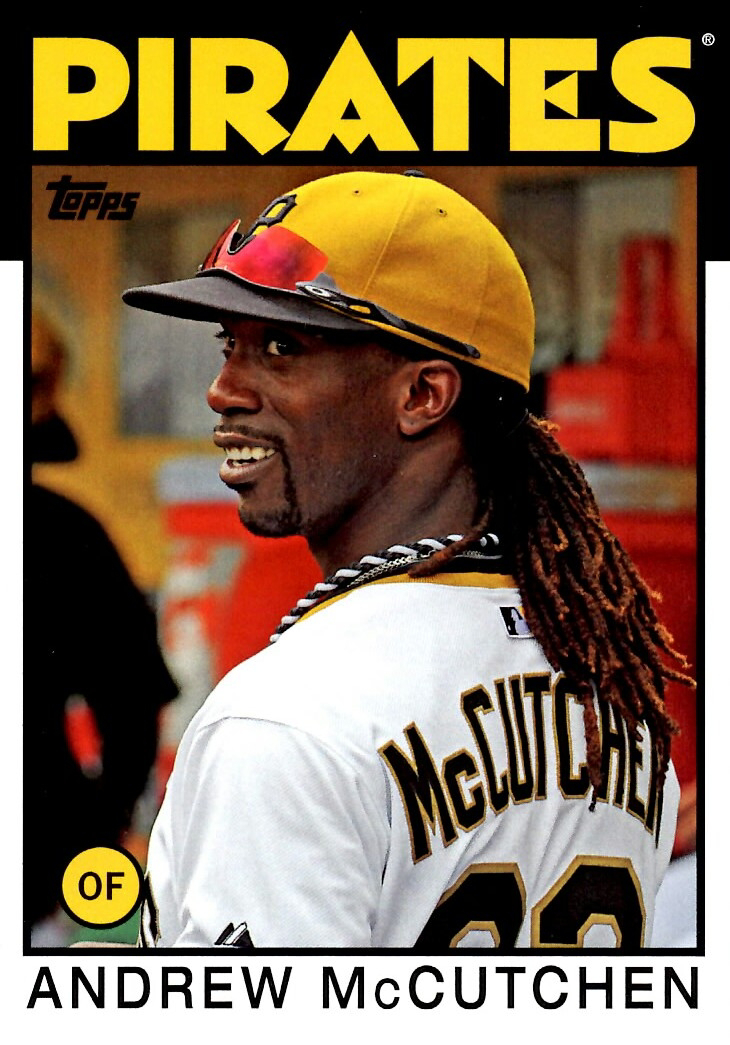 This is my favorite of all the Archives cards produced.  A strange thing about this card is that I think it may be an unannounced short print.  Try finding one on eBay or COMC right now.  You're likely to find less than a handful between all the after market places.  Try looking for any parallels including those sold on eBay, COMC, or WORTHPOINT and I promise you won't find any.
Despite the perceived short print of this card, I approve this selection. 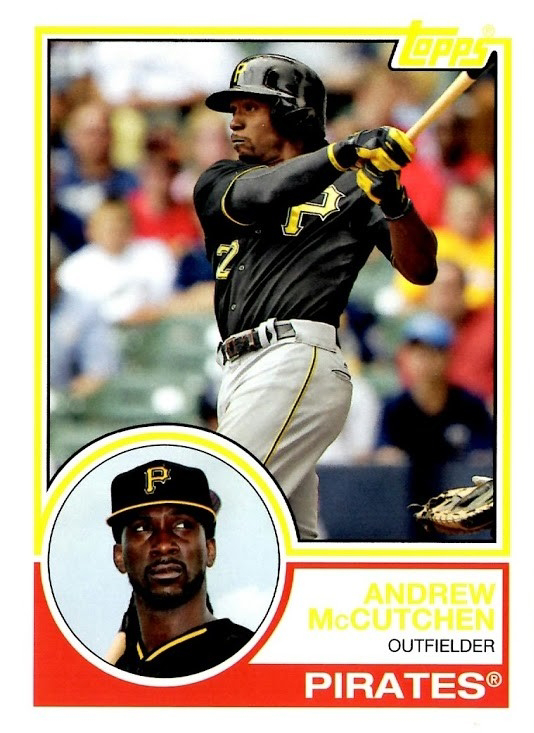 I am so sick and tired of seeing modern players on 1983 designs.  Any of the other years would have been fine with me.  The 1983 design was also used for Josh Harrison and Bill Mazeroski.  The 1976 design was used for Gerrit Cole, Starling Marte, and Roberto Clemente.
Given the choice I guess I would want Cutch in that 1957 design since Willie Stargell was the only Pirates player to get the 57 treatment. 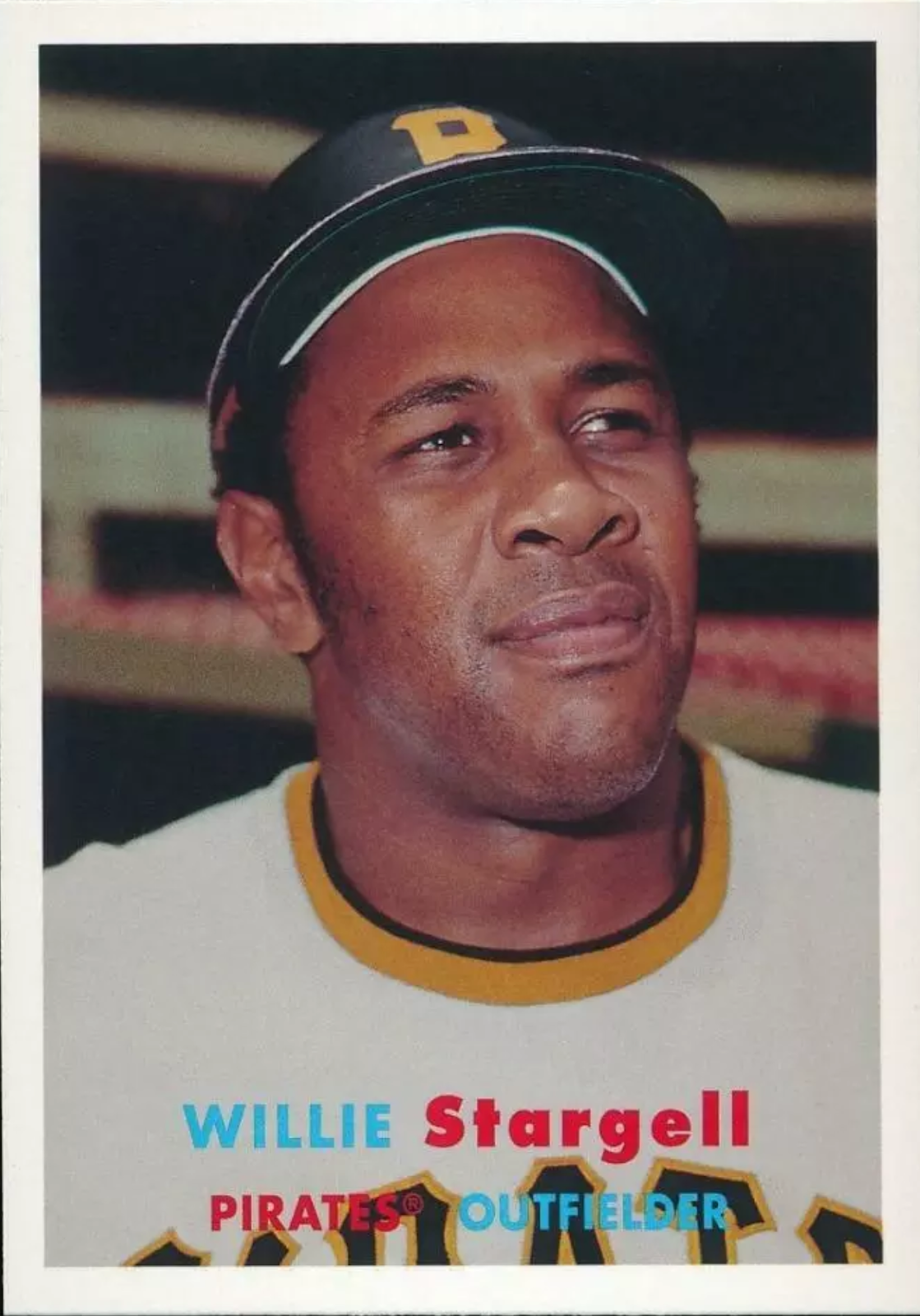 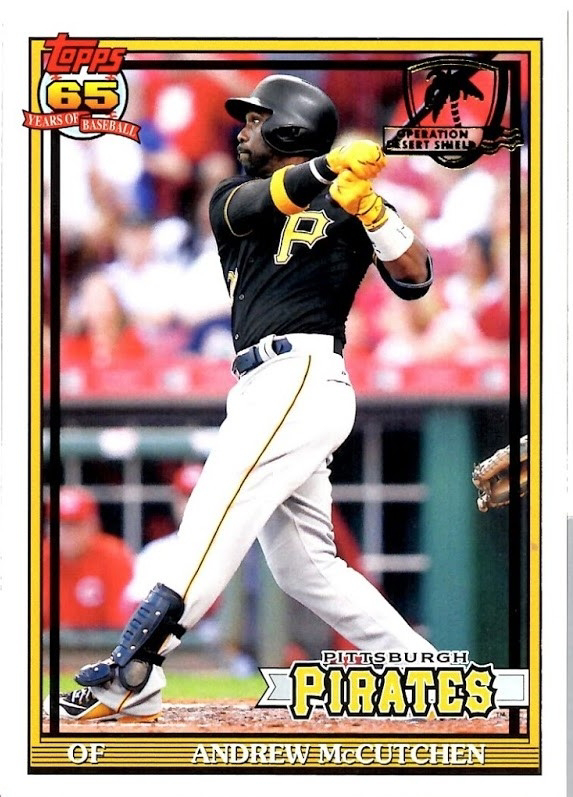 Were it not for the Desert Shield foil variants I would have been begging for a 1953 Topps design.  It seems likely that Topps will continue to avoid putting Cutch in a Topps Living Set card even though JP Crawford and Bryce Harper already both have two entrants in the set.  I like the 91 set.  I have many fond memories opening these packs and trying to build the set with my dad.
No need for a change especially since I have this 1953 style card from 2019 Topps Transcendent. 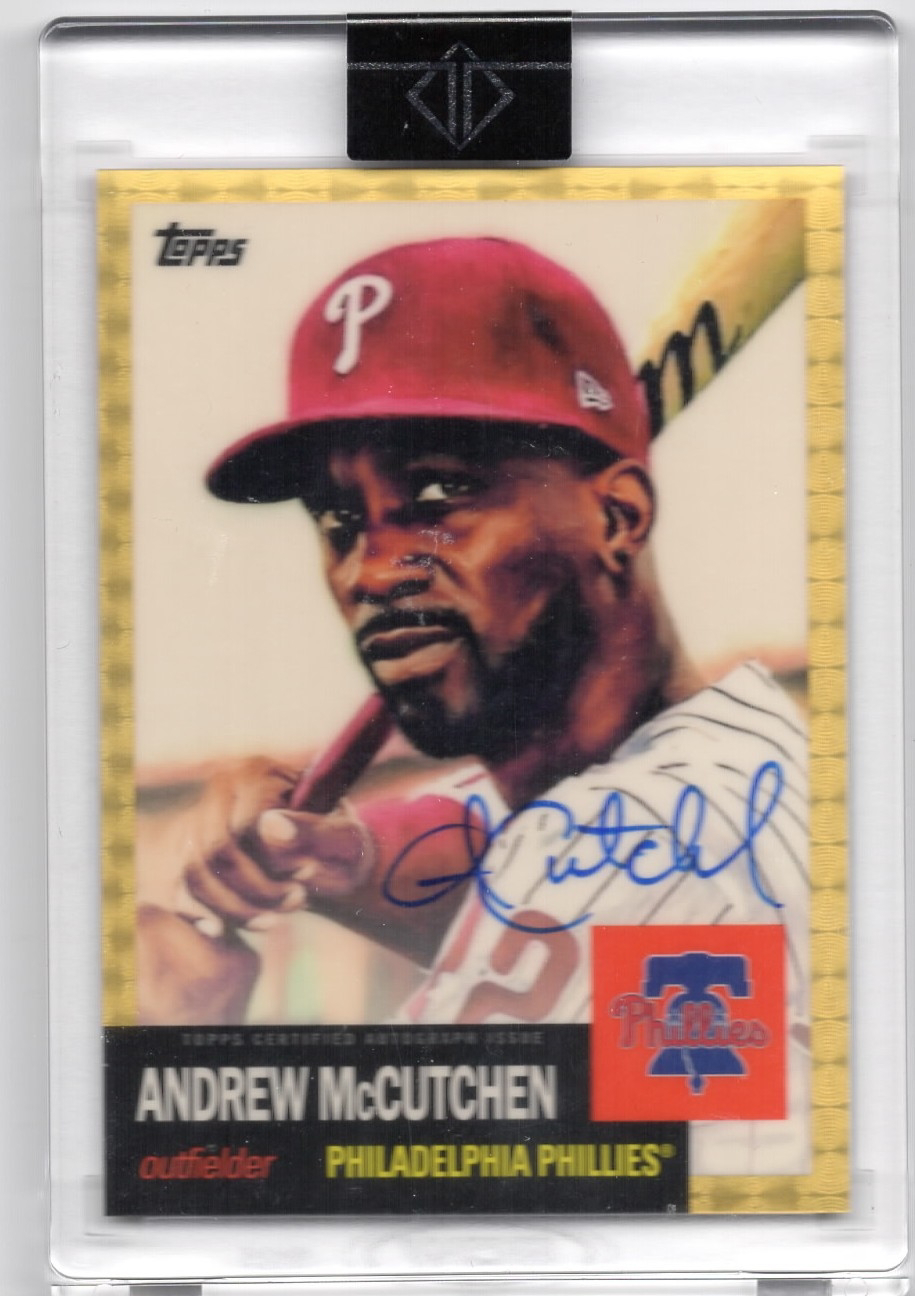 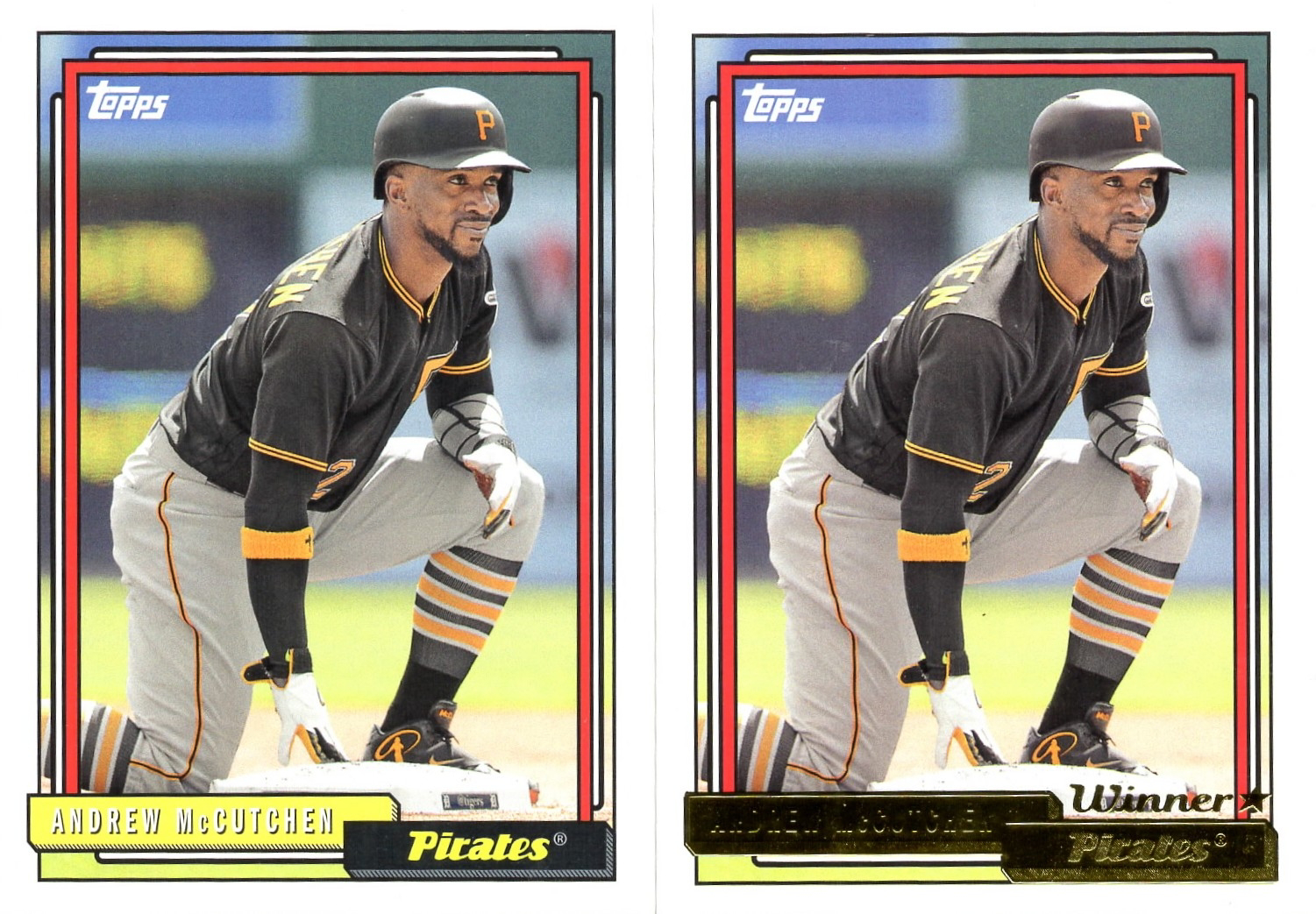 For many of the same reasons (foil parallel reminiscent of the ones available during initial release) I liked the 2016 Topps Archives selection of 1991 Topps, I am supporting the 2017 selection of 1992 Topps as the design for Cutch.  The design was also used for Roberto Clemente, Gregory Polanco, Starling Marte, and Gerrit Cole.
Cutch got a rookie card in 2009 Heritage High Number similar to the 1960 Topps rookie style made famous by the Yaz rookie.  Both Tyler Glasnow (rookie) and Honus Wagner represented the Pirates with the 1960 design.  I guess 1982 could have been a possibility since the double hockey stick style border was only used for Willie Stargell. 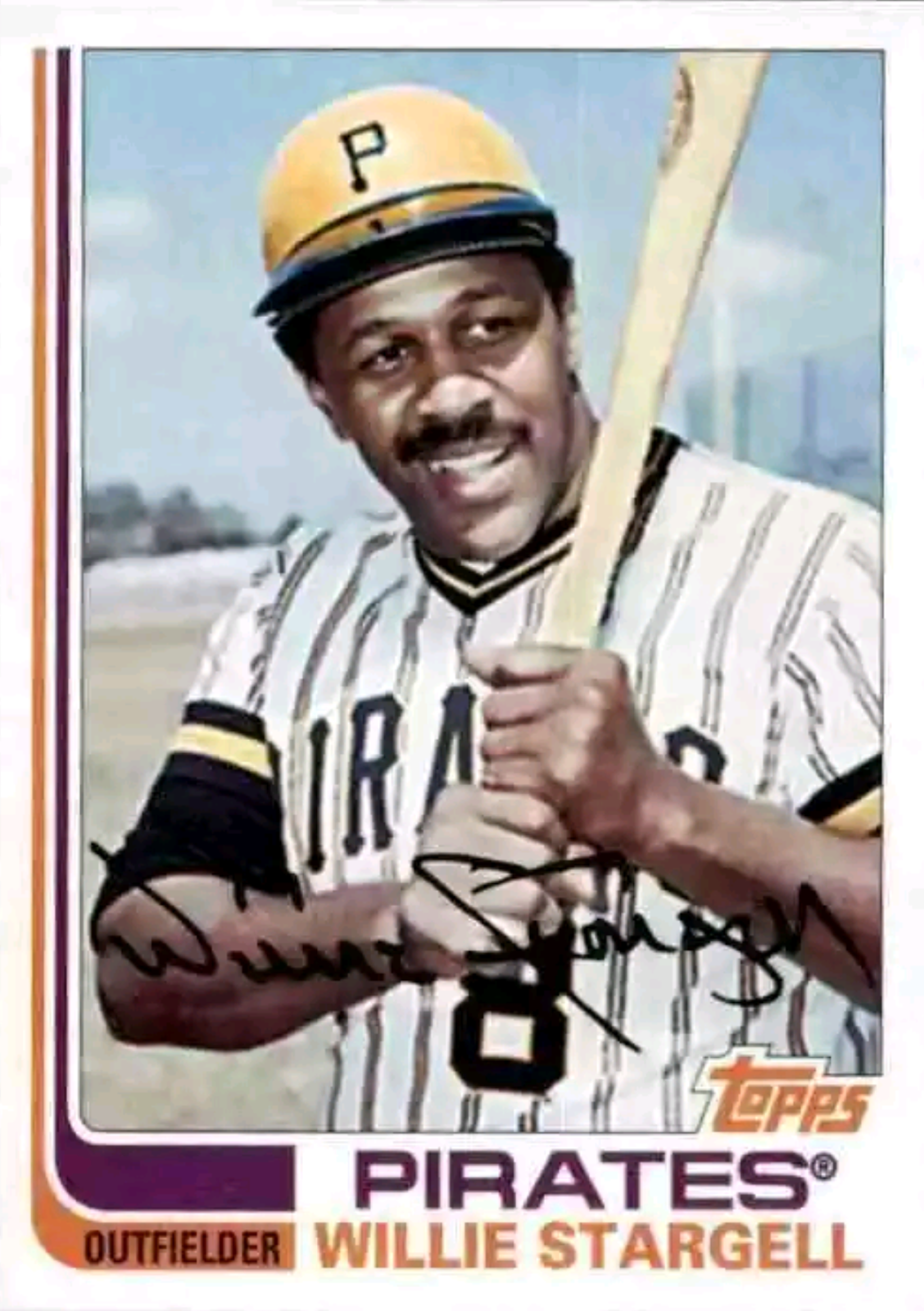 It seems Pops kept getting the short stick (no pun intended for this design) when being placed as a representative for the Pirates in Topps Archives.
2018 Archives
Designs used by Topps: 1959, 1977, 1981
Design chosen for McCutchen 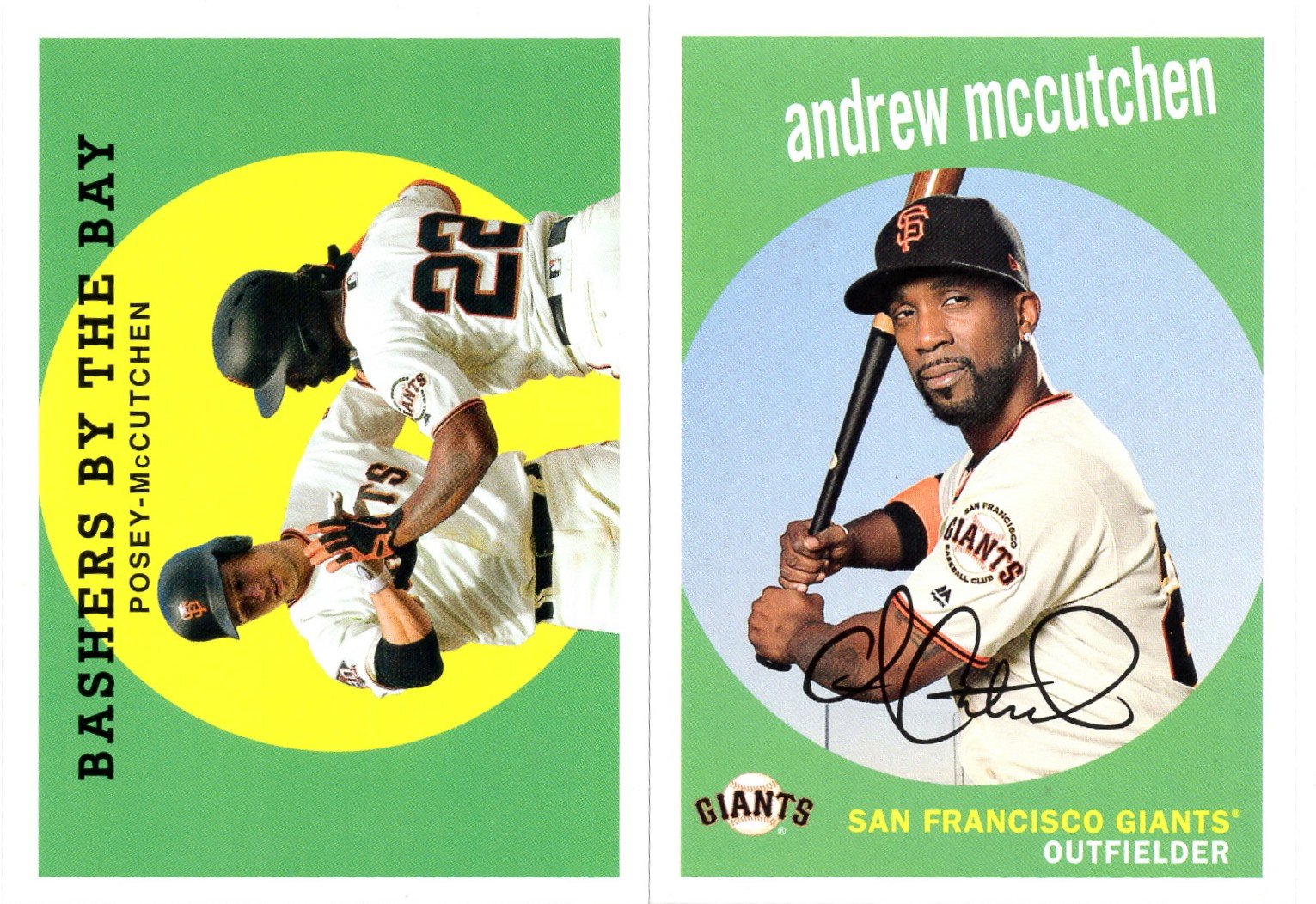 This is a selection that I approve, but given the choice of switching it up I would prefer 1981 Topps.  1959 is a great design and this is the only time Cutch got a solo card in the 1959 design.  However, he also got the 1959 treatment in the card "Bashers of the Bay" with Buster Posey. (Both pictured above)

So if that card was still produced, I would have liked to see a 1981 design for Cutch especially if it was given a pink border like what his team mate Buster Posey got. 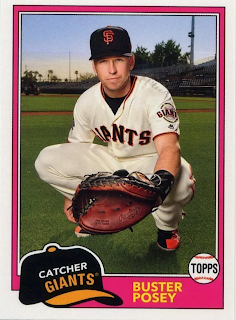 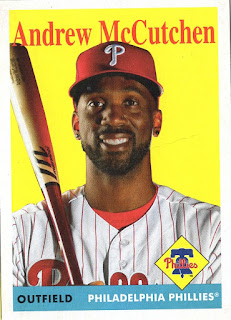 This is actually a perfect selection among the designs offered.  As I have stated above McCutchen debuted in 2009 so his first Topps throwback design was 1960 Topps which appeared in 2009 Topps Heritage High Numbers.  He missed out on all the 1950s set via the traditional Heritage route.  The yellow background and red name letters make this card pop much in the same way Rip Repulski did in 1958.

The only other option for me would be 1993, but again that is only because I would want that gold foil found on Topps Gold style cards for that era.  The 1993 design isn't my favorite of the early 90s Topps designs.  Cutch did receive the 1975 design in 2011 Lineage. 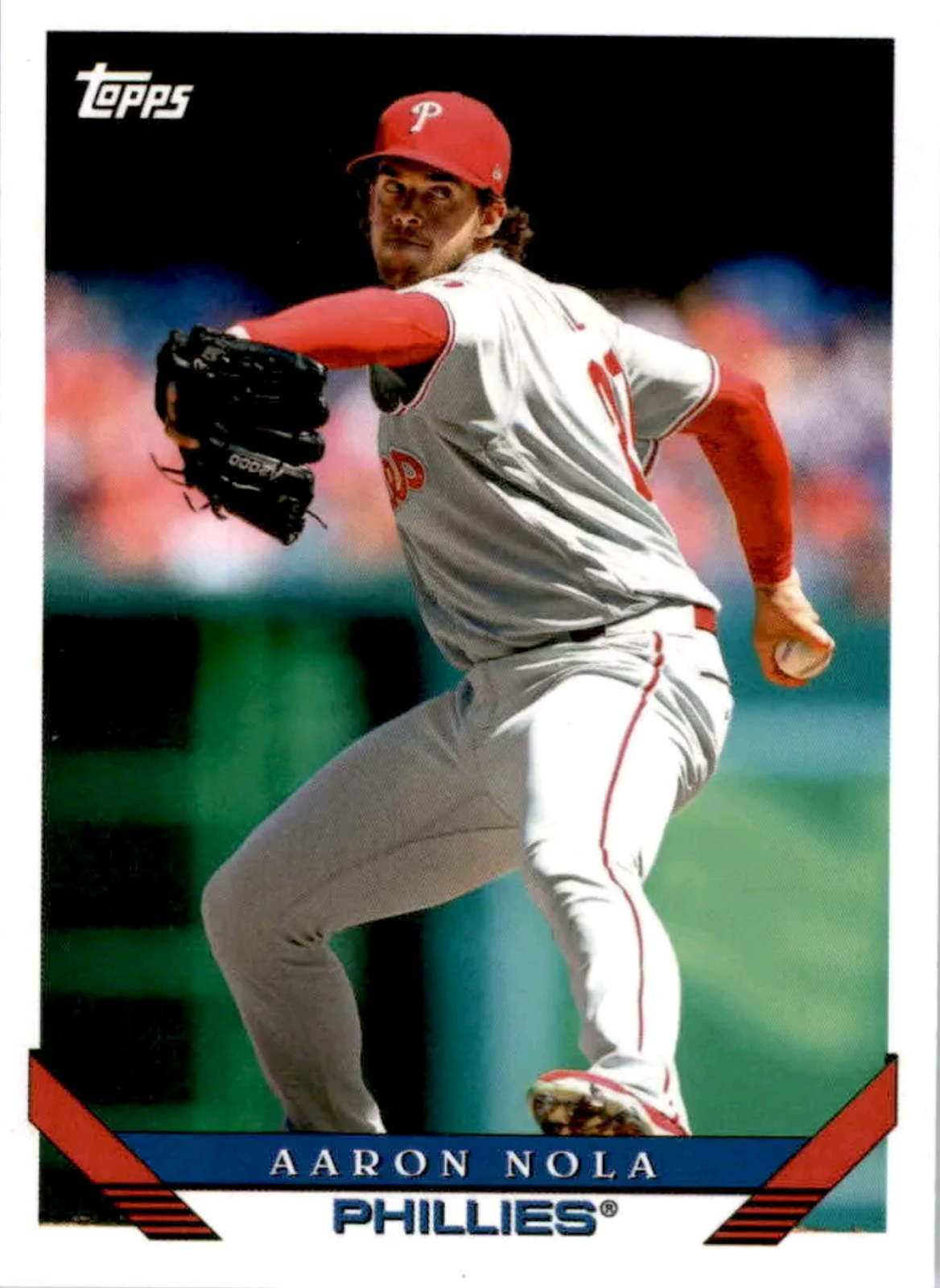 2020 Archives
Designs used by Topps 1955, 1974, 2002
Design chosen for McCutchen
Nothing.
Cutch didn't receive a card in 2020 Topps.
This is an absolute shame that the streak of appearing in every Archives release comes to an end.
Given the choices of 1955, 1974, and 2002 I would probably opt for 1955 Topps because it is an iconic set for Pirates fans (Roberto Clemente rookie!!!).
Getting a Cutch on a 1955 Topps design in his prime in a similar pose to the Clemente card would have been a perfect card.
Unfortunately Cutch is now with the Phillies and his 1955 style card may have resembled what this Steve Carlton looked like in Topps Archives. My second choice would be 2002 Topps.  I wasn't collecting in 2002 and the set is so ugly I want a Cutch card to be represented in my collection with that ugly design. 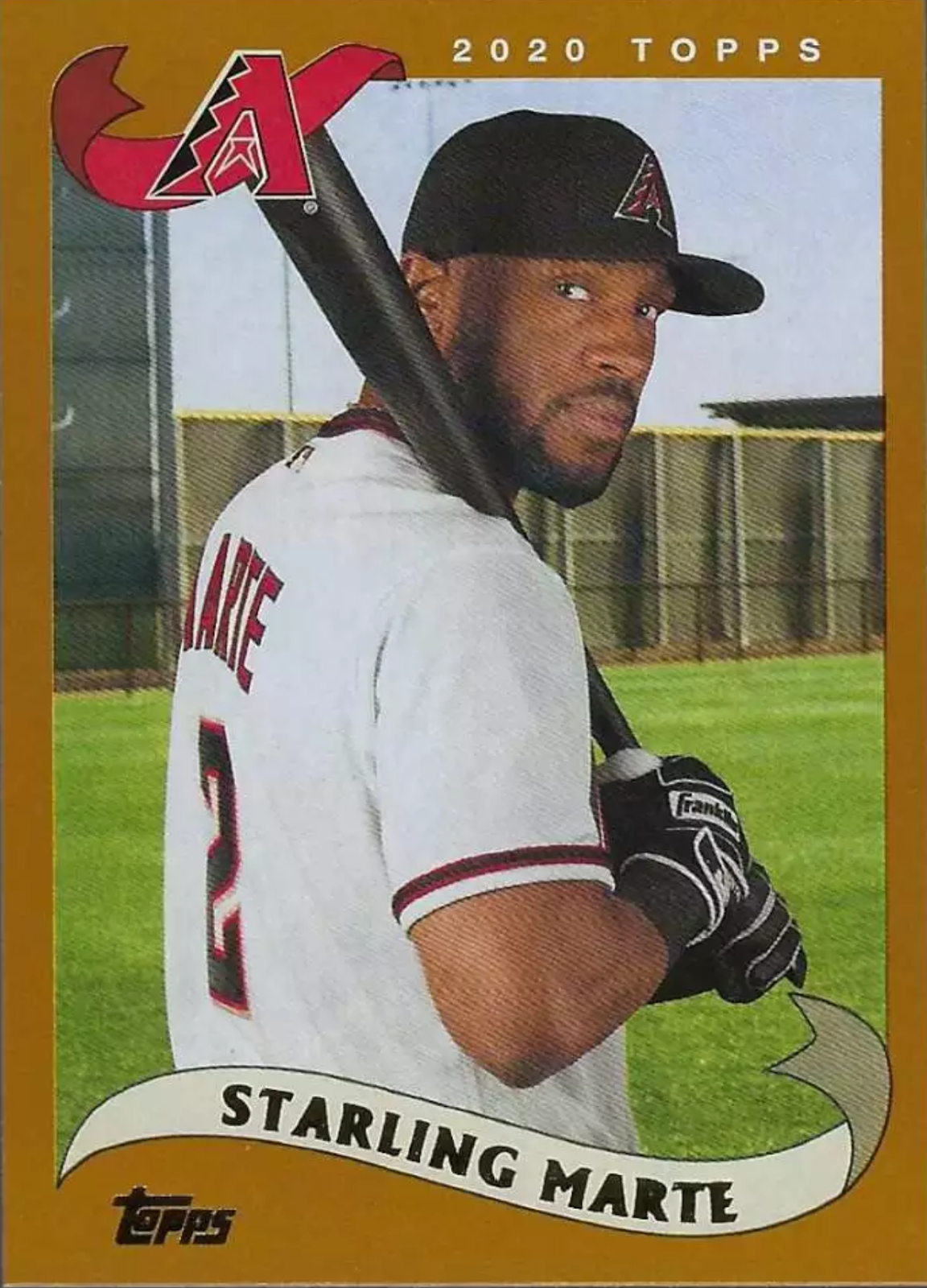 Former Pirates outfielder, Starling Marte, made it look kind of cool.
Have you ever looked at Topps Archives design samples and wished that a player got a different year treatment?
Posted by Collecting Cutch at 2:28 PM