How will the stats this year be valued?

A lot of people have been talking about the statistics for this shortened season and asking how will we look back at this season.
Stats are an endless talking point for all baseball fans from the casual to the hardcore fan.
Andrew has lead the league in a few stats over his decade plus long career.  In 2012, he lead the league in hits, collecting 194.
It is virtually impossible for a player to collect that many hits in a 60 game season.  A player would have to get over 3 hits a game for the entire season to get to a mark like that.  That would result in a batting average of likely over .700.  Like I said, virtually impossible.  Getting the "counting stats" will be tough this year.
However what about the percentage stats?
Now the talks of averages and ERAs can be discussed.  And they should be.
The 3 best consecutive months of McCutchen's career were May, June, and July 2012 when he was the NL Player of the Month twice.
With 77 games played in those three months Cutch hit 22 HR, 59 RBI, and collected 112 hits while walking 33 times.  To say he was the hottest player in baseball during that three month stretch is an understatement.
Even with all that hot hitting it was still "only" a .392 batting average and .450 OBP.
With the season about a fifth of the way done for most clubs people I work with in the Philadelphia area are looking at Phil Gosselin and Adam Haseley and their above .500 batting averages wondering if they can keep it up all year.  The short answer is NO, they can't.
It is hard to hit at a .400 clip for over 2 months.  The last guy to do it had his head cyrogenically frozen.  A few guys have come close, but I don't think there will be a .400 hitter with 55+ games played.  I just don't see it happening.
I bring up these stats facts because I recently picked up a "Refractor" like Prizm card from 2013 Select. 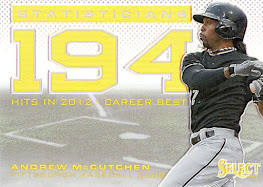 This is the prizm parallel as identified on the back. 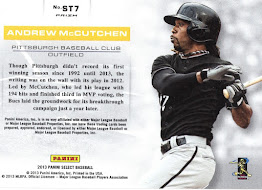 I already had the gold prizm I still need the base. Anyone have one?
Posted by Collecting Cutch at 4:58 PM