Long time Pirates killer, Jay Bruce was traded from division rivals Cincinnati Reds last year to the New York Mets.  Many New York fans quickly disliked Bruce because he didn't immediately impact the club.  As the season progresses Bruce went on a hot streak at the end, but ultimately Bruce and the Mets were shut out by Madison Bumgarner and the San Francisco Giants in the one game Wild Card.

This year saw Bruce return to his standard career numbers.  As of now he is batting .262 with 26 Home runs and 70 RBIs.  Those are good numbers to put in the 4-6 spots in the lineup.

Could Bruce be on the move again this trade deadline?

An interesting idea I have is the Pirates could potentially go after Bruce.  We already know he thrives in PNC Park with the short right field having beat up Pirates pitching many times in his career while a member of the Reds.  We also know that if the Pirates do make it to the post season, they will be without Starling Marte.   An outfield of Polanco, Cutch, and Bruce still looks really good.  The Pirates and Mets have made trades several times in the past few years so there is history there.

Could we see Bruce in Pittsburgh? 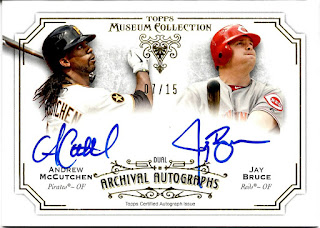 I wouldn't be opposed to the idea.  That's for sure. 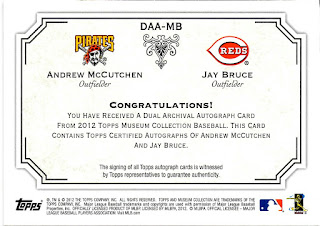 The card you see above is a card I coveted for about 2 years before I finally was able to land one.  It features dual on card autographs of the division rivals Andrew McCutchen and Jay Bruce.  Both players were selected in the 2005 draft class.  Cutch was selected 11th overall and Bruce was 12th overall.  Both were selected out of high school as outfielders.
Posted by Collecting Cutch at 8:59 PM