Ooooohhhh McCutchy you so fine you blow my mind

If you entered my contest and have not received a runner up package, please email me your address so I can get something to you.

I got my first 2017 Topps Finest card in the mail last week. 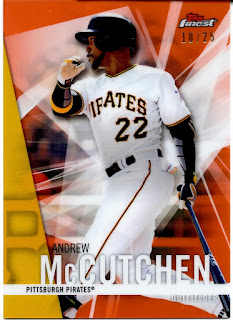 This is the orange parallel numbered to 25. 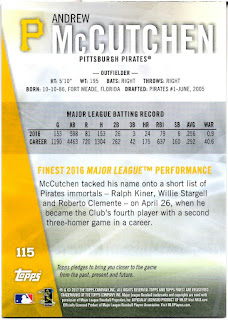 I have an 8 card lot en route that contains the SP base card along with some other players that I will be sending out in trade packages.

Cutch won his 5th career Player of the Month award for June 2017.  After hovering around .200 through April and May, Cutch is now batting .288 on the year after a ridiculous stretch of games where he batted .411 for the month of June (best in league)

Only Albert Pujols (8) and Miguel Cabrera (6) have more Player of the Month awards than Cutch (5) among active players.
Posted by Collecting Cutch at 11:55 AM