As is customary for me every day on my lunch break, I was browsing eBay for more McCutchen cards to add to the PC.  I stumbled across a seller who had a bunch of Just Minors cards with Cutch's auto for under $20.  I tried to convince myself that I didn't need them.

I don't think I tried hard enough as I added 6 cards to my cart for checkout.

I'll show off some of the others in future posts, but these two were a reminder that no prospect is a guaranteed thing.  The MLB draft signing period is over and the trade deadline is just around the corner.  Many teams will begin selling off veteran established players in hopes of adding future cornerstone of a franchise.

The New York Mets thought they had two top outfielders in Carlos Gomez (stay tuned for a future featured hate rant on him in the next few weeks) and Fernando Martinez. 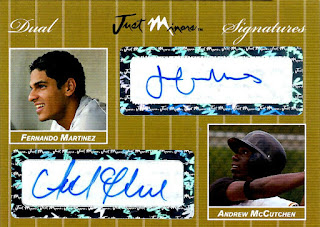 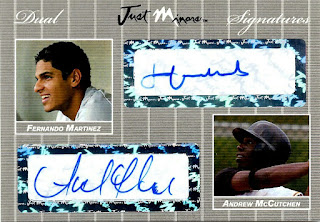 What they actually had was a guy who would be out of baseball by 2013, finishing his career as a .206 hitter.  Fernando Martinez was recognized in the 2013 Biogenesis Scandal and served his suspension.

I snagged both of these autos for $30 combined shipping.  It helped knock off a few more Cutch needs while giving me some great material for a blog post. 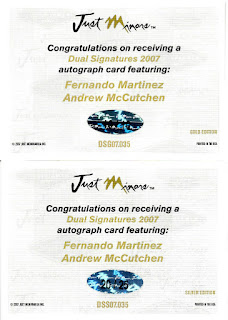 The Pirates are currently in the middle of a 4 game series with division leaders, Brewers.  Both teams will likely look to make small upgrades at the trade deadline.  Could we see some future PED prospects get moved that were once highly touted?

Clearly both the Pirates and Brewers are forgiving when it comes to PED tests.  Starling Marte made his return after serving his 80 game suspension and got a standing ovation from the fans.

Francisco Cervelli who was a key piece of the Pirates winning last night's game was also involved in the Biogenesis scandal.  Pittsburgh loves him.

Oh and let's not forget Ryan Braun.  He was involved in the Biogenesis scandal also and publically shamed a UPS driver to try and cover up another of his failed drug tests.  Milwaukee still loves Brauny tho.

Are guys who take PEDs forgiven too quickly by fans?

What about the wrongfully accused?
Gio Gonzalez was mentioned in the Biogenesis scandal but was later acquitted of the charges.  Yet he will forever have that blemish on his resume. 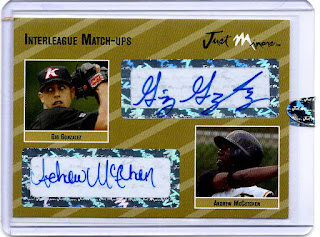 Posted by Collecting Cutch at 10:10 AM