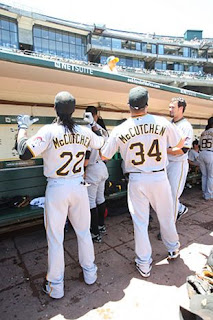 Daniel McCutchen may be best remembered in his Pirates career as being the losing pitcher of the 19 inning Jerry Meals game from July 26th 2011.  In the game, McCutchen threw 92 pitches in 5.1 innings of relief. 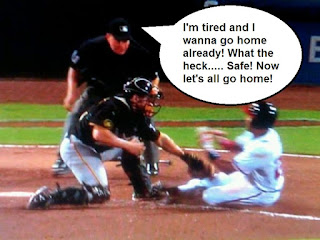 What a train wreck the Pirates season became after that game.

Way before No Relation pitched this game he was in the 2009 TriStar Projections set. The card actually features Andrew McCutchen on the front, not Daniel.  This marks another Cutch Cardboard Cameo.

Fun Trivia Fact
Doc McJames who played from 1895-1901 was born James Mc Cutchen James.  He was the only other player in MLB history to play with a born name McCutchen.

Daniel and Andrew were teammates beginning in 2009 through 2012.

Posted by Collecting Cutch at 4:25 PM