Every year I look forward to the National Treasures Nicknames release.  The Pirates have had 3 memorable players appear in the subset and have all signed their nicknames as inscriptions on the cards.

I never thought that Cutch would get the Notable Nicknames treatment.  Not because Cutch's nickname isn't memorable, but because it is basically just an abbreviated version of his last name.  We've been spoiled by Panini going after guys with nicknames of Thor, Yogi, Captain America, Hebrew Hammer, etc over their releases.  Cutch isn't exactly on the same level as those.

Add to the fact that the last on card autographs of Cutch were in 2012 and you have a shocking revelation that Cutch appears in this set.  With only 5 hard signed copies on a beautifully designed card with his fantastic "ACutch" legible signature there's very little this 2017 National Treasures card doesn't offer. 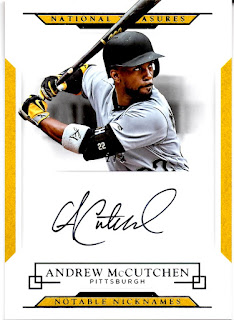 Here's the disappointing news though.

On the back you can read about his nickname and penchant for Clutch moments, but like Corey Kluber not signing "KluBot" you won't find an inscription on the front. 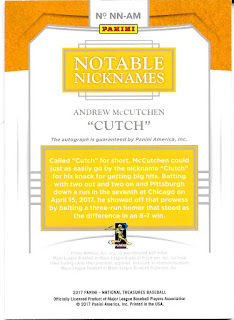 What's your thoughts on the omission of the nickname inscription on the front?

Do you feel like it's 1999 again where every rapper was constantly telling us their name.
DMX - What's My Name

Eminem - Hello My Name is

Update: while checking out the latest news for Cutch I saw that he made this tweet 3 days ago. 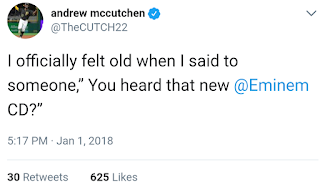