It's been a few days since news broke that Cutch is heading West.  I've been going through my cards remembering all the moments the former MVP gave us Pirates fans.

One card I found was this 2015 All-star game card of Cutch in the batting cage talking to Bruce Bochy. 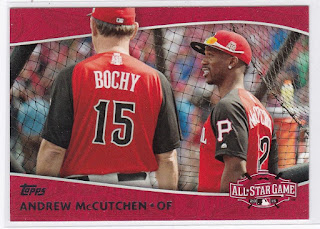 Initial projections has Cutch batting in the leadoff spot for the Giants.  He hasn't batted there since 2009 in an official game.  He did however bat leadoff for the 2015 All-Star game which included Cutch's 1st All-star game homerun.

Cutch will once again return to right field and the team is still searching for a defensive minded centerfielder.  Hunter Pence will move to left field.
Posted by Collecting Cutch at 8:42 AM