I have been counting down predominately using serial numbers or card numbers.

Today would be the 17th day before Opening Day.  I am certainly excited for that.

I am more excited to announce that in 23 days I am heading west for the Pirates home opener vs the Reds.

Here is a 1/1 card from 2010 Triple Threads highlighting 6 players that Topps thought would be Perennial All-Stars in the National League. 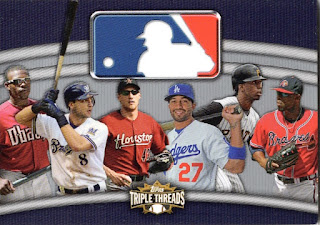 The players depicted on the card is a who's who of upcoming outfielders patrolling the National League at the time. 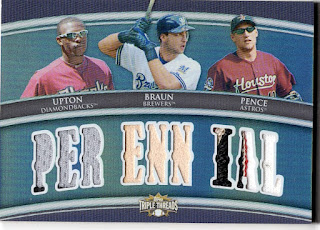 Ryan Braun leads the group with 6 All-Star appearances, but some of those numbers may be tainted as we later learned.  From 2008-2012 he was an All-Star.  He also represented the Brewers in 2015.

Hunter Pence had a comeback season last year and made his 4th All-Star appearance joining his resume for the 2009, 2011, and 2014 seasons. 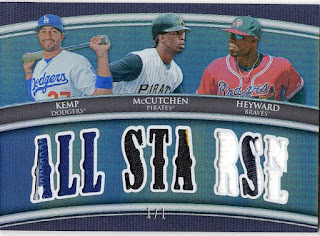 Cutch represented the Pirates in 2011-2015 making 5 All-Star games and finishing in the top 5 for MVP in 2012 through 2015.  He won a player of month award in June 2017 and had better numbers than Josh Harrison at the time of the All-Star Game, but Cubs manager who was representing the National League liked Josh Harrison's versatility for the exhibition game more. 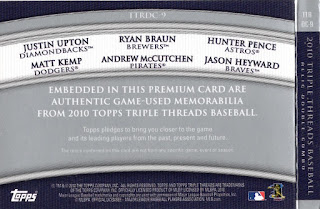 Jason Heyward had an incredible rookie season in 2010.  He hasn't made an All-Star game since.

This 1/1 is the Platinum version.  I also have one of these booklets in the Emerald format (/18).  There are also Sepia, Sapphire, and Gold parallels of this book to chase. 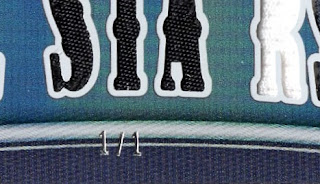 Posted by Collecting Cutch at 3:04 PM