I can only assume with more people housebound there may be more eyes on the blog due to extra downtime.

So as not to get writer's block during this time of a depressing sports free world, what are some things that would interest readers of this blog? 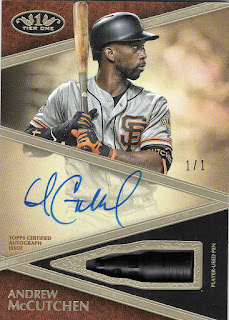 I have probably close to 40 1/1s that I haven't shown off and plan to sprinkle them into the blog throughout the year.

The card pictured above is an oddball card I have been dreaming of Topps to produce for years.  Ever since I saw these quirky player used pens cards I have hoped that one day Topps could produce a card with such a unique feature.  Obviously I wish it was a Pirates uniform, but I'm not going to complain about it. 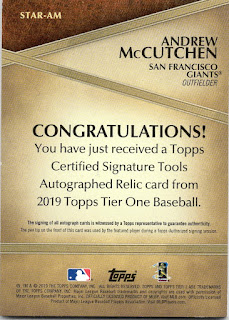 This card almost didn't get to me.  Within an hour of being posted for sale I made the seller an offer and he responded with I appreciate your very fair offer but I am going to field all offers before I accept anything and he countered with the original Buy-It-Now price.

I didn't want to let this card stay on the market and said F It, I'll just buy it and clicked Buy-It-Now.

Fast forward 10 days and nothing...
No tracking info.
No responses to emails.
Nothing.

Life happens and I understand things happen to delay shipments.  This was an expensive card and I didn't care how long it took to get to me, I just wanted to make sure it would eventually get to me.

I even had a fellow McCutchen email him about a Buster Posey card he had listed to see if he was just filtering out and ignoring my messages.
Within 10 minutes my fellow McCutchen collector friend got a response.

I was very aggravated and decided to take legal action (now day 14 of being ignored)
I opened up a PayPal dispute and eBay nonreceipt dispute.

Within a few days I received a package from the city he lived.  The seller never responded to the disputes via proper protocol with eBay/PayPal and I was due to receive my money back.

I messaged him thanking him for sending the card and told him he needs to get better at reviewing messages because I got a notification that eBay found to be in favor of my case for a refund.  I contacted eBay to cancel my claim and provided them with proof of receipt so the seller didn't refund me my money now that I had the card.


Two part question time:
Have any of you experienced a similar issue with a seller who appears to go out of their way to ignore you?

What would be some fun ways to pass the time and read on the blog during this time of self isolation, any countdown or top X cards you want to see?
Posted by Collecting Cutch at 9:17 AM