I recently picked up this DJ Lemahieu autograph from 2020 Topps 1985 design through a coworker. 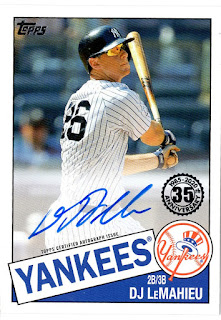 It doesn't really fit my collection needs, but could always be used as future trade bait or a contest give away card. 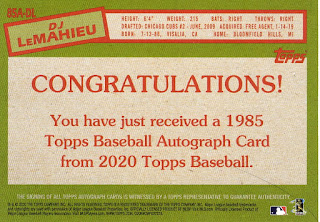 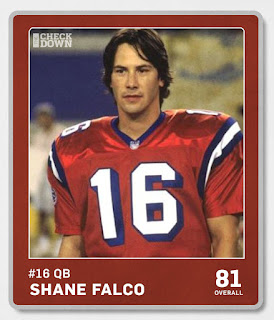 Andrew McCutchen played 30 games (includes post season) for the New York Yankees in 2018.  In those 25 regular season games he was able to produce 0.9WAR down the home stretch of the season for the Bronx Bombers.

His traditional Jersey number (22) was occupied by Jacoby Ellsbury who hasn't played since September 2017.  Ellsbury missed all of the 2018 and 2019 seasons and was ultimately released following the 2019 season with two years left on his contract. 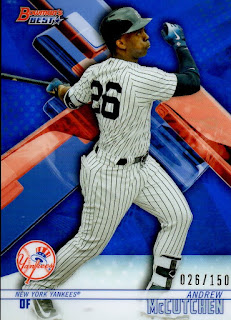 When Cutch elected free agency and signed with the Phillies late in 2018, his jersey number (26) became available.

On January 24, 2019 the Yankees signed DJ Lemahieu to a two year contract and he became the team's most valuable player due to his gold glove versatility in the field and what he was able to do offensively.  He wore #26 for the season.

DJ became an All-Star for the third time in his career, won a silver slugger, was a finalist for a gold glove, and came in 4th place for American League MVP voting.  In 145 games with the injury riddled Yankees, DJ played 1st Base, 2nd Base, 3rd Base, Designated Hitter, and produced 5.9WAR.
Posted by Collecting Cutch at 11:35 AM