Today would have been Opening Day for all MLB teams.  Things have changed a lot since I started counting down to this day 3 weeks ago.  The economy is in turmoil.  Many people are working from home or have been temporarily laid off.  Sports entertainment has been non existant with the suspensions of MLB, NCAA, NHL, and NBA seasons.  Toilet paper has been trending on twitter daily.

The picture of the world we live in today is radically different and that is why today I am going to show off all my photo variants of Andrew McCutchen on Topps Opening Day cards.

Opening Day began making photo variant cards in 2013.  They featured a few members of the 2012 World Series Champions San Francisco Giants along with a few "big name" players who changed teams in the 2012 off-season.  Those cards mostly featured the players at press conferences and included guys like RA Dickey (remember when the Blue Jays traded Travis d'Arnaud and Noah Syndergaard for him?), BJ and Justin Upton, Prince Fielder, Josh Hamilton, and James Shields.  The following year (2014) Topps began using photo variants for the 25 most popular players among collectors. 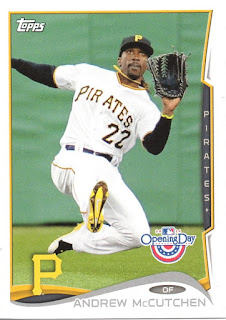 My Eleanor. (Gone in 60 Seconds reference).  This card eluded for a few years until Nathan from Bucs Stop Here hooked me up with it for a bountiful of cards I sent his way.

This sliding catch of Cutch is one of my favorite images ever on a piece of cardboard.  The odds of pulling this card from a pack of 2014 Topps Opening Day is 1:222 packs or 1:65 jumbo packs.  The blue parallel of 2014 would be the last time that a color parallel gets numbered on the back.

The 2015 Opening Day photo variant features Cutch in the on deck circle at PNC Park with the beautiful city of Pittsburgh as the backdrop.  Retail odds for 2015 Opening Day variants were 1 in 2,375 packs and hobby odds were 1 in 307 packs.
****I still need the purple parallel for the rainbow****

The 2016 Opening Day photo variant features Cutch with the Roberto Clemente Award that he won in 2015.  Odds of pulling one of these are 1 in 393 packs. 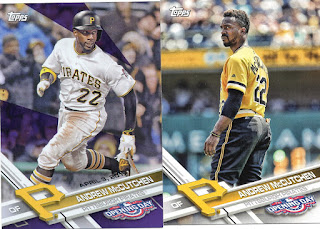 2018 would be the end of Cutch's appearance in Opening Day (he didn't make the 200 card set for 2019 or 2020) so naturally it ended the streak of his 5 straight years of photo variants.  It's fitting that it features an image of him hitting his first Grand Slam of his excellent career and ultimately his final homestand at PNC Park.  The joy on his face as he celebrates the homerun is one of the many reasons he became such a fan favorite in every city he played in, but especially in Pittsburgh.  Pulling a photo variant in 2018 Opening Day is a tough pull as these fall 1 in 477 packs.
****I still need the base for the rainbow****

And Here are the identification codes on the back so that you can determine if you have a SP photo variant.

The top card is a standard photo card.
The bottom card is the code for the photo variant. 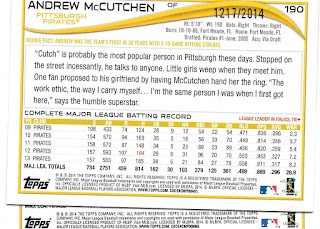 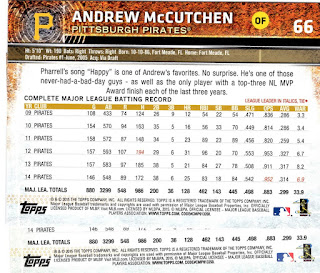 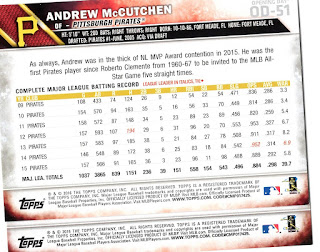 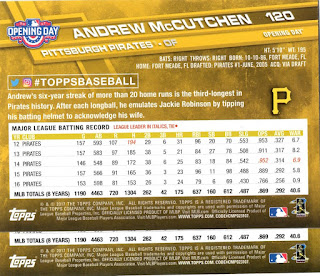 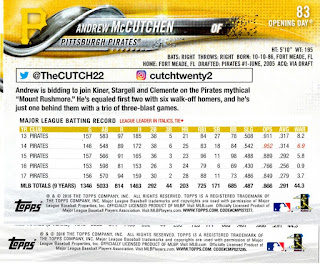 Posted by Collecting Cutch at 11:53 AM