Came through drippin' but not rippin

It's only 18 more nights until Opening Day is upon us.

With that I thought I would show off a card I got last year that I never blogged about.

Allen & Ginter double rip cards have been out for many years.  The concept of the card is almost like a scratch off lottery ticket to the extreme. 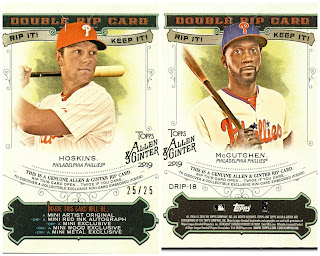 A scratch off not already scratched can start at $1.  If scratched and not a winner, it's useless and the value is nothing.  But if it is a winner you can double, triple, quadruple, or get even more value from "taking the risk".

Double Rip unripped cards go for A LOT of money on the secondary market often selling in the range of $150+ depending on the subject material.  A recent sale of Ernie Banks and Kris Bryant was almost $600.

The double rips are commonly numbered as DRIP-(number) to indicate Double RIP card. I have shown a few double rips both ripped and unripped on the blog in the past.

To date, this is my only double rip in tact of Cutch in a uniform that isn't a Pirates uniform.  I missed out on the DRIP of him and Posey in 2018.

If the Phillies are hoping to contend in a very competitive NL East this year they will need big (and healthy) seasons from both Rhys Hoskins and Andrew McCutchen.

Hoskins appeared in all of the Phillies games last year and lead the league in walks with 116.  (It should be noted that it took almost a week for Hoskins or anybody for that matter to surpass McCutchen in that category after Cutch's season ending injury.)  Despite those numbers, Hoskins finished the season with only a 1.5WAR and batted a career worse .226 with an OPS of .819 and OPS+ 110.  He had the 6th highest number of strikeouts in the senior circuit and produced the 10th most outs. 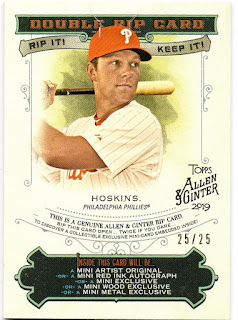 McCutchen was the second best leadoff hitter in baseball at the time of his injury.  His .378 on base percentage made him a perfect option for the Phillies and a great table setter for the team.  Had he not gotten injured and was on pace for 125 runs scored over the season.  That would have placed him 4th in league behind only Betts, Devers, and Acuna.  Without McCutchen setting the table for the rest of the team after his June 3rd injury, the leadoff spot produced only a .295 OBP (29th in league). 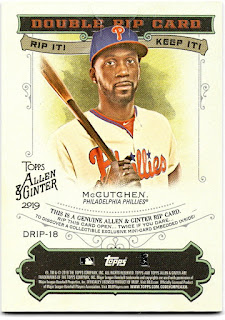 A healthy Cutch and bounce back Rhys will go a long way towards the City of Brotherly Love winning a ticket to the Postseason.

In only 18 more days we get actual baseball games. 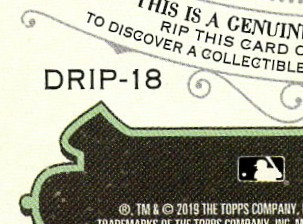 Posted by Collecting Cutch at 5:21 PM