Today would have been the 13th day until Opening Day countdown, but with the season temporarily suspended it looks like I need to find other things to blog about. 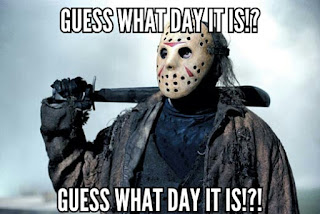 When I think of the saying Friday the 13th I immediately think about Jason Voorhees, the slasher from Crystal Lake.

So with today being Friday the 13th, I thought I could show 13 various DIE CUT cards.  It seems fitting to discuss on such a day.

I have a lot more rare parallels like Gold Prizm and relic die cuts, but if anyone has ever attempted to put a die cut card into a penny sleeve or top loader, you know they are difficult to get the right angle without dinging one of the many potential "corners".

So with that being said here are some of my lower end die cuts. 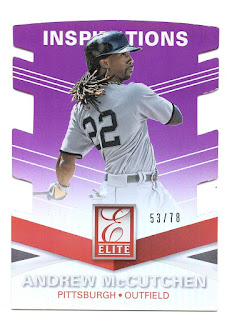 The design for this card looks like it could be a logo for a intergalactic space police force. 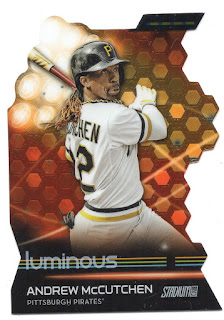 The beehive honeycomb background on these Triumvirate cards looks so awesome. 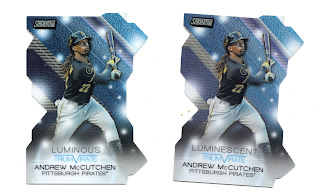 The die cut pieces of this insert interlock with other players to form a full image.  Mccutchen connects with Starling Marte and Gregory Polanco.  Above are the luminous and luminescent variants.  The Illuminator variant is an acetate version and is a case hit.

There are So many different parallels for this set (including some that include sticker autographs). 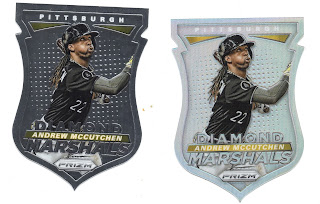 I also have the gold parallel, but this card in particular is one of the toughest to sleeve without dinging that pointy bottom of the "badge" design.  The base and prizm (Refractor) have both been scanned. 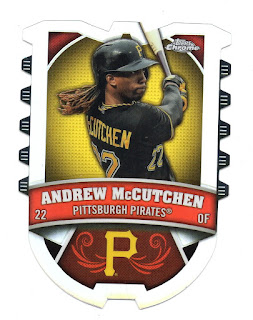 This design reminds me of when I used to make paper snowflakes around Christmas time.  We would take a coffee can to make a perfect circle then fold it a couple times.  Then start just slashing.  When the paper would get unfolded it would have a symmetrical design with just random pieces missing. 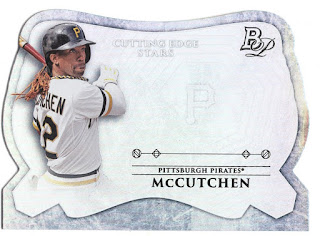 This Bowman Platinum card would look amazing with an autograph on it. 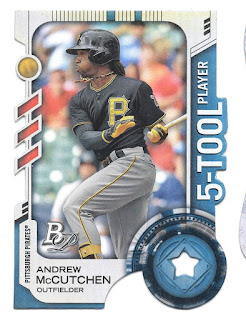 This Bowman Platinum diecut insert gives me the impression of just cut out anything that would have the black border be part of a design.  There are so many edges on this card. 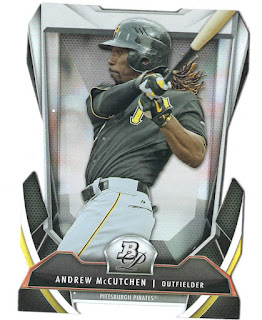 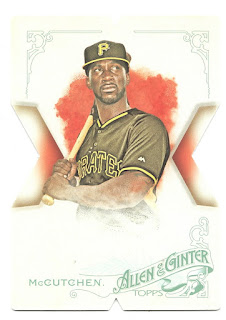 As a precursor To Ginter X Topps produced some die cut cards that were distributed at the National to get fans excited about the 10th Anniversary of the product. 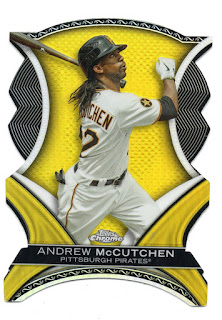 Holy cow do the colors on this thing pop!!! 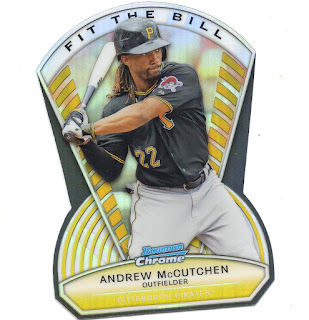 This design clearly took a silhoute of Abraham Lincoln's favorite headgear and modernized it into a shiny baseball card. 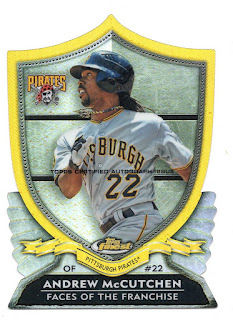 This is my favorite "oddball" card I have of Andrew McCutchen.  The card was designed to be part of the autograph subject line, but Topps never put the stickers on the cards or foil stamped it.  It is believed that only 15 were produced and with no major markings besides the tiny print certified autograph issue it is very likely that the other 9 are somewhere in a quarter bin.
Posted by Collecting Cutch at 4:50 PM