from the Triple (3) Threads release

Talking about Cutch being a 5 time All-Star 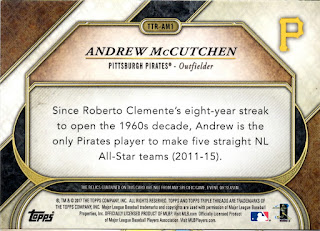 This pair of cards was another Probstein win back in December.

Cutch joined Clemente as the only Pirates to be in an All-Star game 5 times when he completed the task from 2011-2015.  He should have been the Pirates rep in 2010 instead of Evan Meek too btw.
Posted by Collecting Cutch at 9:22 AM