Screw The Rules, I Have Money

Something I am kind of ashamed to admit is that I still watch the anime Yu-Gi-Oh fairly often.  Back in 2004ish I participated in locals with my deck.  I won a bunch of matches, but never took my poker skill set, deck building ideas, and knowledge of eBay deals to take my king of games mentality even more.

My friends and I even cosplayed as the original cast and I built authentic decks for each of us based on the characters.

Over the years there have been many fan dubs which are both silly and stupid.

One of my favorites is by a guy who calls himself lilkuriboh and he made a viral meme with Seto Kaiba saying "Screw the rules, I have money" 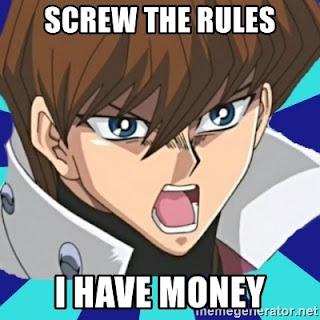 This fit the character perfectly as he was always getting the latest cards to try and stop his arch enemy, Yugi Mutou.

When I saw this 2018 Heritage coin card pop up for sale, I immediately thought of this saying. 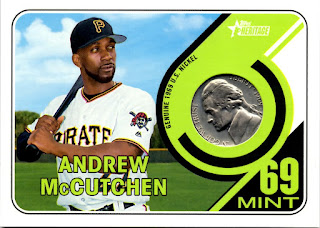 That right there is a genuine 1969 nickel. 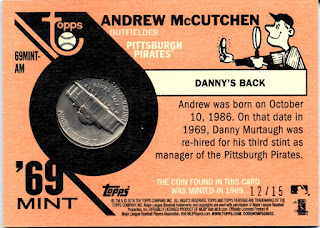 Baseball cards and coins?
Screw The Rules, I Have Money


Now to get back on the topic of YuGiOh, I am so confused by all the new rules and haven't actually played since around 2007 when the X-Sabers were first being released.  Now that ArcV is on Netflix I am watching it and have to say I am enjoying it quite a bit.  The characters are very interesting and I am curious where the arc (pun unintended) will lead.  If I had to rank the series it would be this order: 5Ds, Original, ArcV, GX, zexal.
Posted by Collecting Cutch at 7:14 AM

Email ThisBlogThis!Share to TwitterShare to FacebookShare to Pinterest
Labels: /15, 1969, 2018, coin, heritage, screw the rules i have money, Yugioh