Small world afterall, the details of a cardboard odyssey

On Saturday I went to the CSA show in Virginia with my brother and had an awesome time.

It started out with a bunch of laughs on the 3.5 hour car ride down which lead to breakfast at the BK Lounge (Burger King) before the show started.  That didn't end well as my brother lost a tooth while eating breakfast.

A similar tooth loss happened to me at Texas Roadhouse earlier in the week.  I guess we have sensitive teeth.

The main reason why we went was so he could meet Mark Brunell and Jimmy Smith (he's a Jacksonville Jaguars fan).  There were a bunch of former superstars like Emmitt Smith, Barry Sanders, Dan Marino, Eddie Murray,  Cal Ripken Jr, etc also there.  Most of the guys I would have been interested in meeting were only there Sunday.

While my brother was meeting the former Jags players I was walking the floor looking for trade bait, supplies, and of course any Cutch cards I could find. 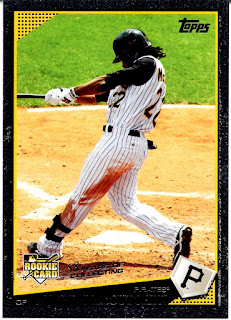 The back of the card has some specks on it so it won't grade well.  I suspect that it had been placed on other blacks that weren't "dry" from the printing process yet. 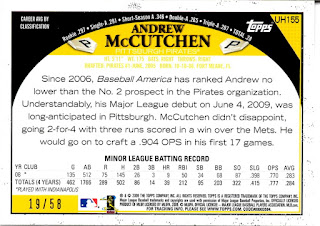 To be honest, this great card may have not made its way into my collection had the seller not started small talk about the amount of Pirates I grabbing from his boxes.  He asked how I felt about McCutchen being traded and if I would still collect him.  I informed him that I might have the biggest Andrew McCutchen card collection in the world and told him about my nearly 200 1 of 1s.  Well it turns out that he sold me one of my favorite cards in my collection, a 2005 (draft year 1st licensed card) Topps Update Cyan Printing Plate autograph.  He remembered seeing my collection online and was very impressed with it.  Kevin, if you read this keep in touch and thanks for adding to the collection.

Often times I get the base card of Cutch last as I hope to get them in trades or pick them up at shows or if I absolutely have to get them, add them to my COMC purchases.  Shipping for commons is just too expensive.  I managed to get 5 base cards of Cutch at the show in the 10 cent and 15 cent bins.  So collectively, these 5 cards ran 55 cents (all the 2018 Heritage was in 15 cent bins) 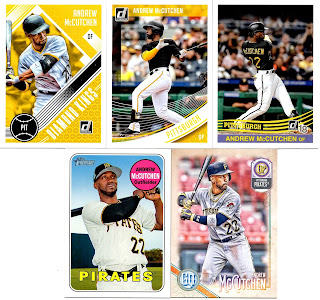 The other Pirates cards I snagged From the 10 cents to 25 cent bins?  Check them out below 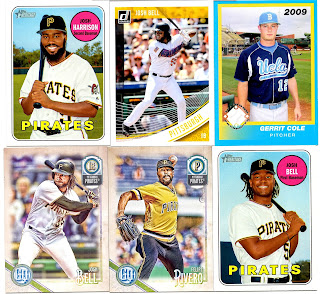 Felipe Rivero changed his name yesterday to Felipe Vazquez to honor his sister.  Josh Bell cards for a quarter or less seemed like good value as did the Gerrit Cole UCLA card.

Here's some other Buccos I found that I couldn't pass up 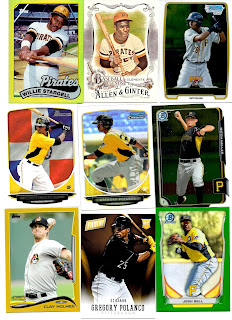 The Stargell is /199.  A New Clemente is always a welcomed addition.  25 cents for a 1st Bowman card of Gregory Polanco? YES!

Clay Holmes made his MLB debut a few nights ago.  The Gold Pro Debut is numbered to only 50 copies.  The Polanco Black Friday is also numbered and the Josh Bell green chrome is only 99 copies.

Overall that was a good haul, but the card below got me really excited from a nostalgia standpoint. 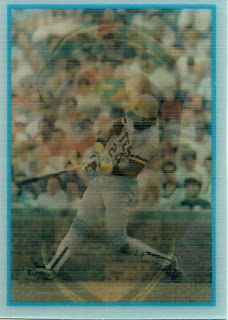 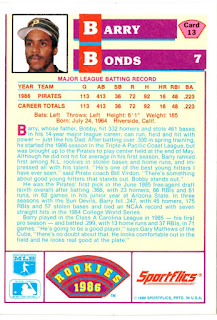 The inner child in me couldn't pass this up for a buck.

I got a bunch of other cards, most of which I will be shipping out to some of you, my loyal readers.

Posted by Collecting Cutch at 9:00 AM