Cardboard Cameos: Rematch No One Was Waiting For

The Pittsburgh Pirates will be trying to avoid an 8 game losing streak that has taken all the early buzz of the team's first 2 weeks success completely out of the air.

The starting rotation excluding recent struggles of Chris Archer (now on IL) and Jordan Lyles (also on IL) has been pretty good.

Tonight the Pirates will be sending their most reliable arm, Trevor Williams, to face off against Rich Hill making his season debut.   This won't be the first time these two faced off.  In 2017, Williams, threw 7 shutout innings against the Dodgers while Rich Hill took a no hitter into the 10th inning. 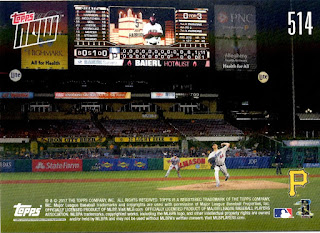 Pirates fans all remember how that ended.
Josh Harrison hit an 0-1 pitch for a game winning walk off homer. 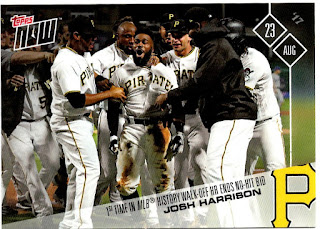 I like these "Where's Waldo" style of cardboard cameos.  Can you find the McCutchen cameo on the card?
Posted by Collecting Cutch at 1:50 PM