If you grew up in the 90s you likely watched the movie Empire Records a half dozen times.  I know for me it was one of my favorite most influential movies in my teenage life. For the longest time I wanted to work in a record store like that. Kids today will never understand how awesome it was at record stores.

The movie focuses on a bunch of young adults working at a record store that is being bought out by a major franchise on Rex Manning Day.

Rex Manning Day is celebrated as April 8th in the movie.  Many of those involved in the production of the movie say that the date was chosen because of the passing of legendary 90s star, Kurt Cobain.  Rex Manning's music is significantly different compared to the great grunge rock star.

It was a very awkward scene and made many of us viewers not appreciate Rex Manning.

Many people likely remember Cutch's epic walk off homer against the Dodgers last year on April 7th 2018 (I talked about it yesterday).  Cutch is usually a slow starter each season, so how does he do on Rex Manning Day, which falls within the first 10 games of the season? 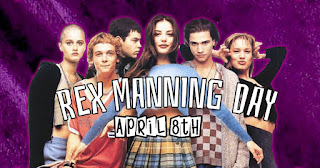 His on base and ability to draw walks is slightly better with a 12 for 37 performance at the plate.  That equates to .324 OBP.

Rex Manning was played by actor Maxwell Caulfield who was born in 1959. 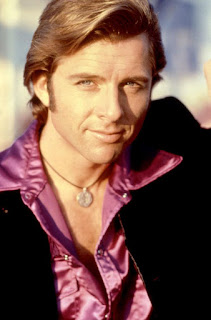 Last year Cutch got the Archives treatment using the 1959 design.  I have picked up both the base version and the signature omission variant among many different parallels. 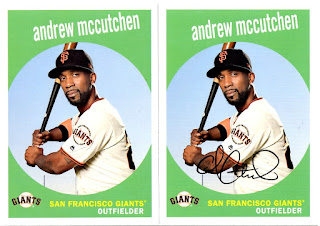 
Posted by Collecting Cutch at 5:43 AM