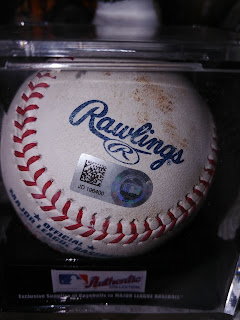 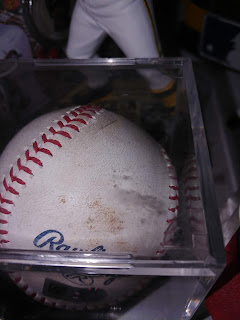 I have been trying to acquire game hit baseballs of Cutch in different stadiums now that my cardboard collection has gotten completely out of control.

With the addition of Statcast in every stadium, game used baseballs go to a whole new level of collecting fun.  By entering the code at MLB.com authentication site you can learn everything there is about that baseball. 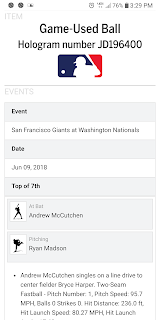 So we learn that this baseball was used in a game with the San Francisco Giants playimg against the Washington Nationals in Washington.

It was the first pitch thrown by Ryan Madson in the top of the 7th inning to Andrew McCutchen which lined it to Bryce Harper for a distance traveled of 236 feet at a speed of 80.27MPH. 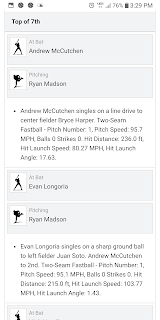 Using the same ball, on the very next pitch, Evan Longoria scorched it on the ground to Juan Soto.  It left the bat at 103.7MPH and traveled a distance of 215 feet before being retrieved by Juan Soto.  It was hit with an angle of only 1.43 degrees. 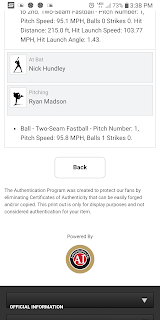 Upon retrieval of the ball, Ryan Masson threw it to catcher Nick Huntley and it was a ball.  At that point Madson must have said "this is all your fault" to the 108 stitched piece of equipment and asked the umpire for a new ball.

Posted by Collecting Cutch at 11:20 AM