Andrew McCutchen has been the leadoff hitter since arriving in Philadelphia. Batting behind him is a two time All-Star and the 2016 National League hits leader, Jean Segura.  Segura has bounced around since making his MLB debut in 2012 with the Los Angeles Angels of Anaheim.  He was a key part of the Zack Greinke trade where he went to Milwaukee and flourished as a table setter for a retooling Brewers lineup.

He was then traded to the Diamondbacks for Aaron Hill and Chase Anderson prior to the 2016 season.  In Arizona he became a hit machine and lead the National League in hits that year.

Following the 2016 season Segura and Mitch Haniger were traded for Ketel Marte and Taijuan Walker.

After two seasons and another All-Star appearance, Segura was again traded for a prospect package...this time to Philadelphia. 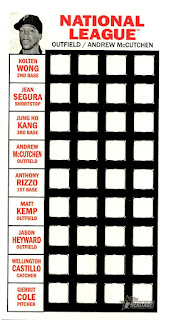 Above is my only card I have of Cutch with his new teammate, Jean Segura, listed.  It is a 1967 Punch out Box Topper found in 2016 Heritage. 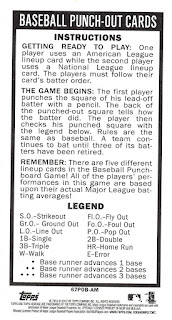 Today is the last day to post for my contest, so if you want to get a last minute entry in before tomorrow's  before sure to leave a comment here.
Posted by Collecting Cutch at 11:55 AM