In 2012, the Pittsburgh Pirates used a hand gesture called "the Zoltan" made famous in the movie Dude Where's My Car?

I even remember doing the Zoltan symbol with my brother and his groomsmen at his wedding in 2013. 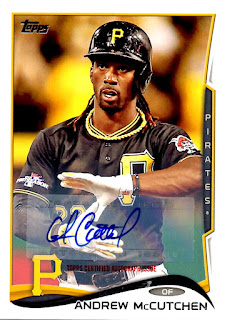 I've shown off a few of my Zoltan cards with Cutch on them before.  The card pictured above is a 2014 SSP photo variant autograph numbered 4/5.  The image is from the 2013 Postseason Game 3 victory over the St. Louis Cardinals.

I also have this booklet of Marte and Cutch that I got from Matt at BobWalkThePlank as part of our epic trade a few summers ago.

It is also numbered to only 5 copies.

Five Years after the last Zoltan style card of Cutch got produced, I picked up a Zoltar inspired card of Cutch.

What's that you say?

Zoltar is a mechanized prophet you can find at boardwalks across America.

It was made famous in the movie Big. 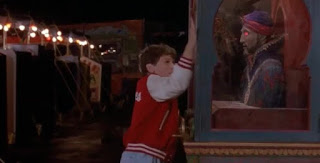 Tom Hanks had a big role in the movie (pun intended) 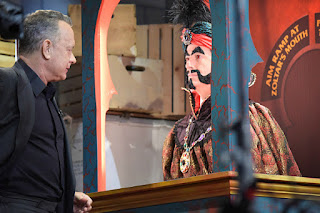 Zoltar machines are known for telling fortunes for a small fee. 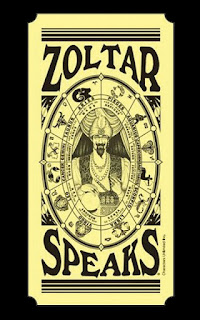 Not to be outdone, Andrew McCutchen is a fortune teller of sorts too.

Well at least according to this 2019 Gypsy Queen Fortune Teller mini on card autograph. 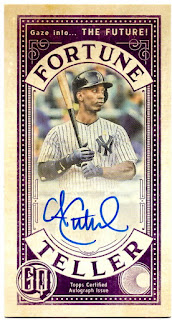 It's my first autograph of Cutch in a Yankees uniform (it won't be my last though).  I purchased it from someone who is a Brewers fan and has a Ryan Braun collection that could rival my Cutch collection if he ever put it online.  He also included a 2015 Heritage Refractor as a bonus, just because he loves the hobby and appreciates a fellow player collector.

Production on this Fortune Teller was limited to ONLY 20 copies of this card. 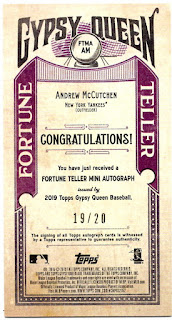 Posted by Collecting Cutch at 8:54 AM