Who The Hell Is This Guy?

One of my favorite scenes in the movie Major League is when the two construction guys are talking about the team and the one guy says "Who are these f***ing guys?"

For Phillies fans that were used to the losing ways of the past half decade, they shouldn't be saying that anymore as the Phillies completely revamped their lineup to put their previous seasons top four hitters at the bottom of the lineup and replacing the top of their lineup with a collective 15 All-Star Appearances among the four of them.

Leading things off for the Phillies is the 2013 NL MVP. 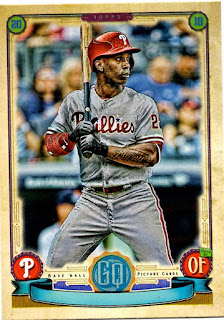 Wait, what?  That doesn't look like Andrew McCutchen. Who the hell is that guy?

Well, this 2019 Gypsy Queen is the missing nameplate parallel of Cutch.

The image used is a photoshopped image of Cutch from his Yankees days (September/October 2018) brushed to look like he is wearing his Phillies gear.

The back discusses how successful Cutch has been in the league over the past decade. 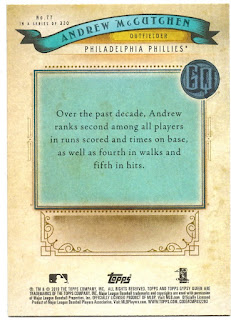 Pretty successful over that time period, I'd say.

With all that success, you should never be saying "Who is this f***ing guy"
Posted by Collecting Cutch at 5:55 AM