Yesterday I treated myself to seeing Captain Marvel while the Miss was at work and I was enjoying a day off.

For those unfamiliar, Captain Marvel is the 21st movie in the Marvel Cinematic Universe.  The bulk of the movie takes place during the mid 90s (1995 to be specific).  While I won't reveal any specific details or spoilers, but there is a major event in the film that takes place in 1989.

Coincidently, the film's star actress, Brie Larson, was born in the year 1989.  She was perfectly cast by the way in case you haven't seen it.

Last year I spotlighted Brie when I was showing off the pink designed backs of a 1989 style insert I own of Cutch.  You can revisit that post here to see Brie Larson in all her hotness.

In addition to the Chrome Superfractor 1/1 I showed off in that post with Captain Marvel's Brie Larson, I have another pretty awesome card using the 1989 design. 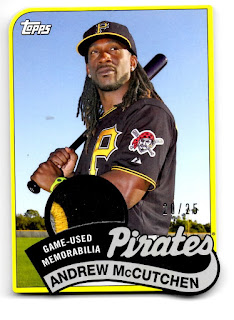 This 2014 Die Cut Mini has a nice patch from an away game Pirates uniform.  The card is numbered to only 25 copies on the front and shows Cutch posing like a Steel City Superhero. 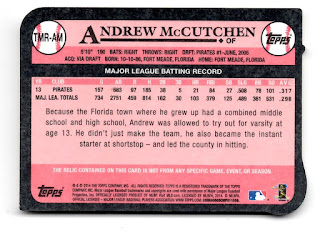 The back of the card features the traditional look of a 1989 Topps card.  Black borders and a pink/magenta back taking up the majority of the card.  The only year showing is Cutch's MVP 2013 SEASON accompanied with his career totals through his 2013 season.  There is a writeup about how Cutch tried out for the varsity team as a 13 year old because the middle school he attended was so small it combined with the neighboring high school.  At such a young age, Cutch became his own Captain Marvel as he was the team's starting shortstop and lead the county in hitting.


As promised I am digging deep into my collection to find some cards that I haven't shown off yet featuring Cutch in his Pirates gear.
Posted by Collecting Cutch at 5:15 AM