Cutch is the MLB version of John Cena

Topps has released two sets of product thus far into the 2019 season.

It's not uncommon for some stars to be saved for Series 2.  Cutch normally makes the Series 1 cut though , but has shown up in 2017 (following his rough 2016 season) as a Series 2 star.  Cutch missed Series 1 this year and it is likely because he was a free agent and would sign on with a new team and finished the 2018 season as a one month rental for the Yankees.

So Cutch is 0 for 2 in making it into base sets for Topps.  He does have 1 insert in Series 1, a Topps Stars of the Game card that features him in a Yankees uniform.  There were no additional parallels of the card to chase.

Yeaterday, I saw that Panini released their 2019 Donruss checklist.  Cutch again doesn't make the cut for any base cards in the traditional set.  While this is disappointing cause I would have liked to see him appear in more New York or Philadelphia cards, I am ok with the delay in printing out more cards for me to chase early in the 2019 season.  Andrew is included in a relic set called 1985 Donruss Materials and much to my delight he is to appear as a member of the Pirates Pittsburgh Baseball Club.  There are 3 color parallels I will need to chase for this.

With ONLY 4 cards of Cutch released in the 2019 season so far, that has given me time to get caught up on scanning, updating spreadsheets, and best of all ENJOYING MY COLLECTION as it stands.

Below is a camo card of Cutch from 2013 that I have had for a few months that I never got to enjoy by showing off on here.  Topps started doing various versions of camo parallels beginning in 2013.  The 2017 and 2018 camo parallels are EXTREMELY difficult to notice when going through a stack of cards.  The 2015 Snow Camo version is a unique looking parallel to chase, but quite honestly Topps got it right the first time they tried.  2013 Camo reigns Supreme still. 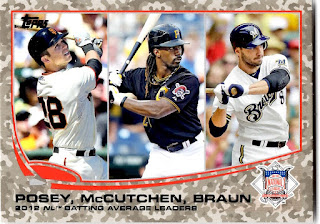 The Camo parallels were numbered to 99 copies back in 2013 compared to some more recent numberings of only 25 copies. 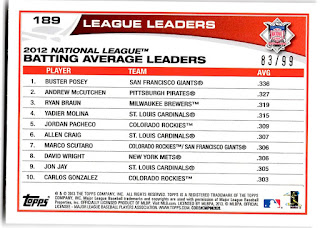 It is rather interesting to see some of the batting leaders of the 2012 season. Allen Craig with 506 career hits over 6 seasons? Jordan Pacheco and his 293 career hits? A 36 year old Marco Scutaro? Any of these guys come to mind for being the best contact hitters in the National League in 2012?  Probably not...

Posted by Collecting Cutch at 10:47 AM