I have a bunch of cards featuring Cutch with postseason hardware.

Let's start off with the two most important awards in the league from a personal level. 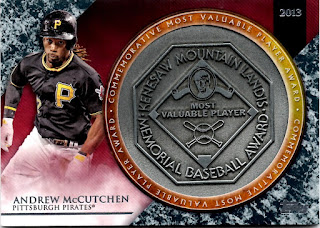 Cutch win the National League MVP award in 2013 as the Pittsburgh Pirates pushed for their first winning season in twenty years. 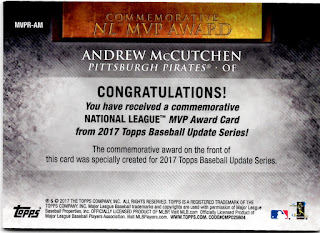 The MVP Award card you see above is from 2017 Topps.

I am predicting Cutch's current teammate Bryce Harper to win the MVP award.  I know Rhys Hoskins looks like a good choice after the first game, but I think teams will start pitching to Bryce and he will live up to the money he is being paid (at least for this year).  The Phillies will make the postseason for the first time since 2011.

In the American League, I am predicting Mike Trout to win another MVP award because, well it's a safe pick.

As for Team MVP for the Pirates, I think Corey Dickerson will be the first half MVP of the team, but will be traded at the deadline.  I can see Gregory Polanco being the second half MVP for the team.

Rookie of the Year 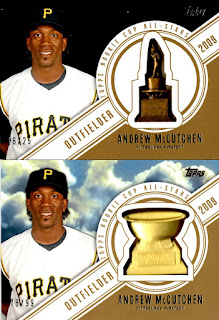 Well, Cutch didn't win the award in 2009, finishing third to Tommy Hanson and Chris Coghlan.  Cutch was a representative for Topps All Rookie Team though. 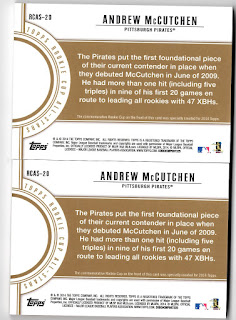 Topps has used Cutch for their Rookie Cup and Rookie Trophy cards in recent sets. 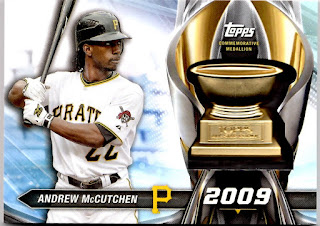 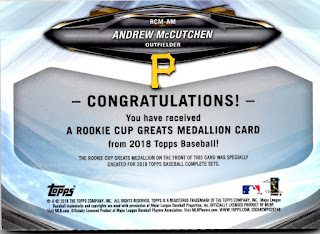 National League Rookie of the Year
Fernando Tatis Jr
The fact that the Friars believed enough inbhis ability to be a game changer that they risked an extra year of control says how legit this defensive wiz can be.

American League is loaded with top prospects Vlad Jr, Eloy Jimenez, Kyle Tucker.  I think that Tucker will stand out among the others.

As for the Pirates Rookie of Year, I am going with Nick Burdi.  The Seinfeld Boys (Kevin Kramer and Kevin Newman) are both ranked above Burdi as is their top pitching prospect Mitch Keller.  However, I think that Newman and Kramer will be fighting for playing time with other middle infielders on the Pirates roster.  Keller likely will have to have at least five strong starts in the minors before being promoted.  There will also have to be epic failures by the back of rotation in order for Keller to get a call up.

Cy Young
In the NL, I think Mad Max Scherzer continue to carve up hitters an route to another stellar season.  Blue Eye will strike out 300 hitters for a second straight season.

American League
Cutch's former team mate Gerrit Cole will step up in a big way as he is looking for a monster contract as the top free agent following the 2019 season.

Billy Ripken made a bold prediction that Trevor Williams will be the Cy Young.  I think he will be the team's best starting pitcher for the 2019 season.

Posted by Collecting Cutch at 6:49 AM