One thing I have liked about the Donruss brand is their stat line parallels.  They provide some really unique stats about the player while also making a limited number of foil parallels to chase.  As a player collector I find this both thrilling and frustrating.

The three types of parallels to chase are:
Career, the most common of the stat line parallels. It represents a player's accomplished total in the 100+ range. Average, On Base, Slugging, are the most commonly used for position players.

Season, the second most common. This normally is something in the 20-100 range that the player accomplished. For position players it could be HR, RBI, SB.

Game, the hardest to track down. These are almost always under 10 and can reflect RBI, HR, SB, R, BB, Hits.  THESE ARE TOUGH!!!

I will show off some of my other stat line parallels in the future, but was super excited when I saw this Season Statline Diamond King pop up from 2016 Donruss.  I got it for about $7. 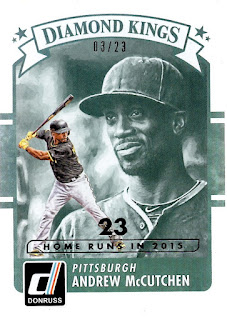 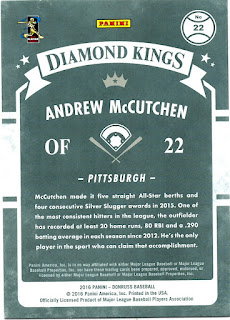 Using a hitter friendly ballpark like Citizens Bank Park in Philadelphia do you think he will hit the over or under on that number this year?

He has hit 20 homeruns in 8 straight seasons, a feat not accomplished by any other current active player since 2011 that isn't named Nelson Cruz or Giancarlo Stanton.

Posted by Collecting Cutch at 4:35 PM