Maybe it is the fact that I am getting older and holding onto nostalgia by saying things like "when I was a kid..." and "things used to be so much better when...", but honestly those older Bowman Chrome color parallels do a Chuck Norris dropkick to anything being produced by Bowman today.

The gold chrome on the older cards is so distinctive and gives it a sense of awe that is unparalled (pardon the pun) in today's hobby.

Sure we have Gold Waves and Flash Gold's and Gold Golds now, but remember when Gold was just Gold?

Man those were the days...

I said I was going to go deep into my Treasure Room to show off some early Andrew McCutchen cards I have that I never showed off before.

This 2004 Gold Chrome is probably as old as they are going to come unless I get a wallet sized little league photo of Cutch. 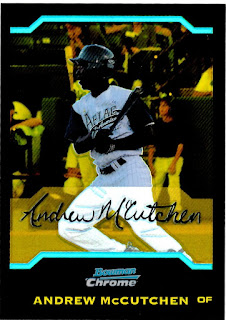 Prior to the 2005 MLB Amateur Player Draft, Bowman released a card set for some of the top 18 and Under high schoolers that may be selected in the draft.

The cards were released as a redemption only set and many went without being redeemed. 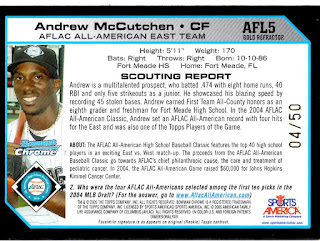 The card may say that it is numbered to 50 copies, but many believe that only 34 copies were made available as that is the number of sets publicly redeemed for the gold.

Posted by Collecting Cutch at 7:33 AM