In addition to having a unique card collection of Andrew McCutchen that is nearing 3,000 cards I have begun picking up ticket stubs from games that feature memorable moments in his career.

One of the first tickets I grabbed when I started this adventure towards ticket stub collecting was getting a ticket from his MLB debut.

Andrew made his MLB debut on June 4th, 2009 at home against the New York Mets.

There are currently no players on either team that were with the Pirates or the Mets during that game. 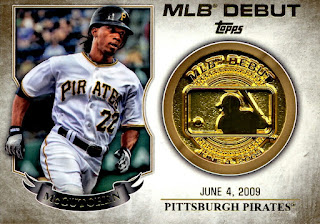 Posted by Collecting Cutch at 8:44 AM