On June 2, 2013 in the middle of the Pirates memorable season, a fan favorite cemented himself in Pirates fan's memories for many years to come.

Garrett "G.I." Jones also known as "GFJ" among fans (Garret F*ing Jones) launched a HR in the bottom of the 8th inning to tie the game up 4-4.

It was the power of the HR that fans remember though.


He was the first Pirates player to launch a ball into the Allegheny River ON THE FLY. 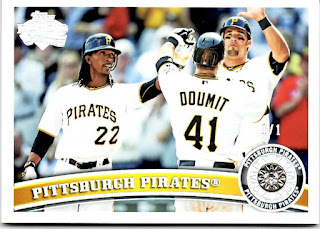 Garrett Jones was a favorite of mine while he was with the Pirates along with Ryan Doumit and of course Andrew McCutchen.  This card is the 1/1 Diamond Card Topps produced in their Diamond Card Giveaway promotion in 2011.

Posted by Collecting Cutch at 2:45 PM