Today I am not going to show off a baseball card.  Instead it is a piece of game used memorabilia, but not just any boring item.  This is probably one of the coolest items I have added to my collection this year and I have already shown off some pretty awesome pieces to the collection like the foul ball Cutch hit before his 12 pitch walk off homer vs the Dodgers on April 7, 2018.

I've shown some nice cards over the years that discuss McCutchen's first homerun.

Topps produced a manurelic medallion for player's 1st Home Runs and an insert set (with three parallels to chase).  I showed those cards off back in 2017, which you can revisit by clicking here.

Last year I showed off a card that Topps produced for 2015 Topps Tribute called Milestone Materials.  In that post, I showed a card that includes a swatch of a baseball used in a game with historic significance.  The ball is from a game between the Twins and Pirates on June 17, 2009 when Andrew McCutchen hit his first homerun.  It is likely that the ball is just a ball thrown in the dirt by Francisco Liriano to Eric Hinske (who was DHing for the Pirates that day), but it is certified as a ball used in that game.  Pretty cool piece of cardboard if I must say  And only 10 were produced so that's even cooler.

But, what I am going to show off today takes that volume button and cranks it up to 11 (I'm sure some of you will get that reference) 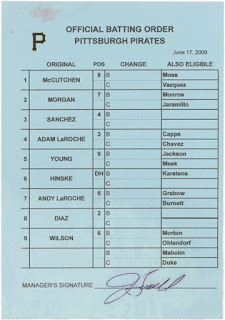 Above is the actual lineup card used by John Russell for the Pirates visiting the Twins on June 17th, 2009. 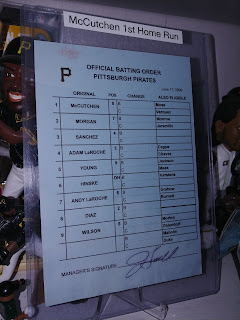 I won it on the 2020 Spring Premium Goldin Auctions.  Here is the original listing. 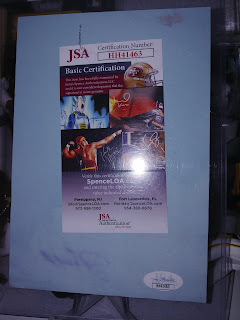 It is certified by JSA on the back.

This is the same auction house that sold a Mike Trout Bowman Red auto for nearly a million dollars ($900K). That card made national headlines for selling for so much money.  The card was talked about a lot here locally here in NJ, but also was discussed on Good Morning America, MLB Network, ESPN, among others.  The auction house also sold NBA Finals memorabilia of Kobe Bryant and Michael Jordan.

I can't roll with those types of auctions.

It may not make National Headlines, but this unique piece of memorabilia is perfect for my collection.

Even if it only earned 0.01% of the final price of THE BIG TICKET ITEM that made those headlines, I am very happy to have snagged this for $100.  I think the mistyped auction description (listed as 2019 in title instead of 2009) definitely helped.  The fact the 2009 Pirates were terrible and had an unknown manager like Russell helped too.

I plan to get it framed and am looking for a photo of the game to use with it.

If you had an item like this for your favorite player, how would you display it?


Posted by Collecting Cutch at 7:43 AM

Email ThisBlogThis!Share to TwitterShare to FacebookShare to Pinterest
Labels: 2009, Lineup card, This day in Cutchstory