During the Coronavirus Quarantine I found myself looking for minor league cards of some of the best stars of the game over the last decade that have been teammates with Cutch.  I am planning on making a seperate shelf using old McFarlane figures and displaying them next to their minor league cards.

One of Cutch's former teammates that I have long been an admirer of is Buster Posey. 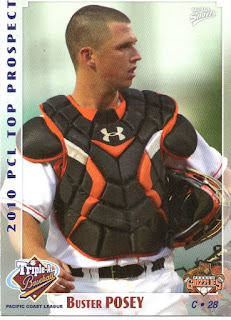 Another player that I have really liked watching play is Madison Bumgarner. 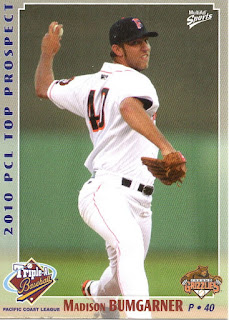 Bumgarner went on one of the finest pitching postseason ever in 2014.  It (unfortunately for my Pirates) started in the Wild Card Game when he threw a complete game 4 hit shutout.  He struck out 10 and walked only one batter (Andrew McCutchen) in a dominating performance.

He continued to dominate into the Division Series, Championship Series, and World Series.  He put the team on his back and he shut teams down in a dominating fashion.  Collectively for the 2014 postseason, MadBum threw 52.2 innings and allowed only 6 earned runs.  45 strikeouts to 6 walks.  World Series MVP. NLCS MVP. 4-1 record and 1 save that postseason.


Collectively Posey and Bumgarner were the heart of the 2010 Giants teams. 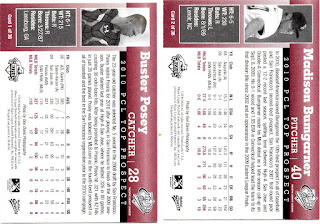 One thing is for sure.  They are two of my favorite Giants teammates that Cutch had in his brief time in San Francisco.

I didn't know this until I began writing this post, but Bumgarner opted out of his Topps contract following the 2017 season.  That is why there hasn't been any Topps products with Bumgarner since then.  Beckett made an article about the omission of MadBum back in 2018.  I find this fascinating as to the reasoning for Bumgarner not doing a contract with Topps.

I also came across a funny article written during Spring Training 2018 when Mad Bum got mad after Cutch hit a HR off him in live batting practice.


Posted by Collecting Cutch at 5:30 PM