It's not the heat, it's the humidity

Growing up I watched a lot of cartoons.  Cartoons eventually got me into comic books and I remember the first comic book I ever bought had Gambit on it.  Gambit was my favorite of the X-Men because of his cool powers and quick wit.

Oddly enough though, my favorite episode of the Fox Kids X-Men cartoon didn't feature Gambit at all.  It introduced viewers to a government sponsored group of mutants called X-Factor.

X-Factor 100 was the second comic book I ever bought and it was because it had a shiny foil cover with Havoc holding a lifeless Madrox, the Multiple Man.

Many other things would happen over the course of comics including the X-books, but I always remember the excitement I had when I grabbed those newsstand copies that featured some of my favorite comic characters.

Cold Comfort remains my favorite go to episode of any cartoon (X-Men or other) and I just got done watching it on Disney+ a few moments ago.

Whenever it gets into the summer I always quote the first line of the episode "It's not the heat, it's the humidity" half a dozen a times.

In addition to introducing the viewers to X-Factor, the episode also introduced us to Bobby Drake aka Iceman.

For hoping for some cooler temperatures in the coming days, I am going to show some Ice parallels from Bowman Platinum. 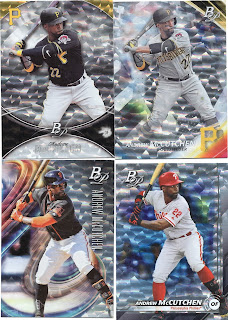 Posted by Collecting Cutch at 6:46 PM