Prices have started to "go down" on the McCutchen 2020 Series 2 SP that the hobby went nuts over during the weekend.  I'm still going to hold out for one in the typical $10-$20 range that it belongs in.  Prices reached highs of nearly $400 with most selling in the $250-$300 range after ESPN's tweet.

I decided I was going to make a game of it and see what else I could purchase for my collection instead of buying one of those cards at the avg price of $275.

I made a bunch of purchases over the weekend and can't wait to start getting them in to show off.  The COMC purchases will be downloaded with the COMC watermark since shipping is still ridiculous for them.  Keep an eye open for all the cards I bought instead of the McCutchen swag photo variant.

On a completely unrelated note, today's card post I purchased back in May and I feared would be lost due to the early June protests and nearly 3 weeks of idle movement.  It did eventually show up last week unharmed. 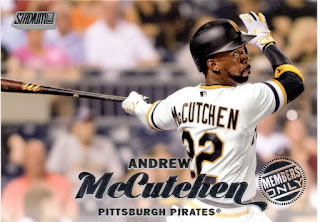 2017 Topps Stadium Club offered the Members Only parallel at a 1:256 packs.  No official print run has ever been announced, but the 1st Day Issue cards were slated to have a print run of only 10 copies and fell at a similar rate of 1:239 packs.

In theory this means that the Members Only cards are likely in the print run of 8 to 10 copies per player.

It can quickly be said that many of these don't exist as it has taken me 3 years to get one.

Snagging a card this rare for only $12.50 was totally worth the hunt though.

Posted by Collecting Cutch at 11:23 AM

Email ThisBlogThis!Share to TwitterShare to FacebookShare to Pinterest
Labels: Members Only, stadium club