I love superhero comic books.  Long before I started my baseball card blogs I had a blog showcasing artwork of a favorite comic character of mine, Gambit from the X-Men.  I sold off my entire comic and comic art collection nearly a decade ago.

I still love comic book movies, but haven't been to a comic shop for probably 5 years despite living only a few blocks away from Kevin Smith's Jay & Silent Bob's Secret Stash.

There have been A LOT of bad superhero movies over the years.  Some that are hated by the fans, I actually like.  (Daredevil, I see you)

Some actors have played in various superhero roles over the years too.  Before Chris Evans was The First Avenger, Captain America he also played Johnny Storm aka The Human Torch in a pair of Fantastic Four films.  He also appeared in the film Scott Pilgrim vs. the World when he played one of Ramona's evil exes.

One of my favorite comic book films of the past 5 years is Deadpool.  He was a favorite character of mine and the actor, Ryan Reynolds, helped make the film a pop culture phenomenon that Fox Studios never could have expected.

Anyone remember Deadpool from the Wolverine:Origins movie?

The film did finally bring Gambit to the big screen, but unfortunately it was hated by the fans due to the poor script and poor special effects.  Taylor Kitsch who played the character did an ok job, but I always wanted the character to be portrayed by a younger actor at Professor X's School of Higher Learning.

I always thought Steven Strait, who played Warren Peace in the teen superhero movie Sky High would have been perfect.  He had the bad guy with a good heart attitude and the look of the character.

I have looked into adding more trading cards of Gambit, Iron Fist, Daredevil, and Iron Man, but I ultimately just come back to the sports cards.

This is my latest autograph of Bryan Reynolds (no relation to Ryan Reynolds).

It ties this entire post together as it is an insert autograph from 2020 Donruss called Sky High.  Reynolds is part of the 10 card autograph checklist and I love getting unique cards of him like this. 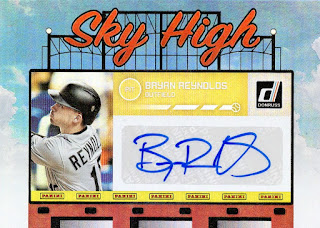 Sky High was actually a pretty good family comedy based on the superhero concept.  It featured Kurt Russell, Danielle Panabreaker, and Mary Elizabeth Winston as under appreciated sidekicks who would go on to be heroes. 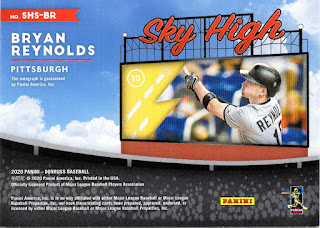 Hopefully we get more heroes.

We certainly need them in these uncertain times the United States is currently facing.

Posted by Collecting Cutch at 8:31 AM