Last week I discussed some actors who played in multiple comic book movies, but I completely forgot to mention Ryan Reynolds who has starred as a trio of comic book characters.  Ryan Reynolds has appeared as Hunter King in Blade: Trinity, Hal Jordan in the (often fan hated) Green Lantern film, and as Wade Wilson aka Deadpool in Wolverine:Origins and of course the pair of Deadpool movies.

Deadpool is Ryan Reynolds most famous comic character he has played.

When the character Deadpool was thinking up codenames he went through names like Scaredevil and Mister Never Die first.

He ultimately decided on Deadpool (and not Captain Deadpool).

The other day a coworker and I were discussing baseball and how we miss it.  He asked who is good on the Pirates besides Josh Bell and I said "Bryan Reynolds looks like he's going to be pretty solid for the next few years".

His response was "Mister Never Die?" 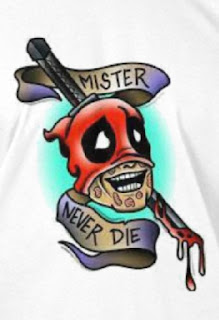 I wonder if Bryan Reynolds ever had gotten mistaken for Ryan Reynolds. 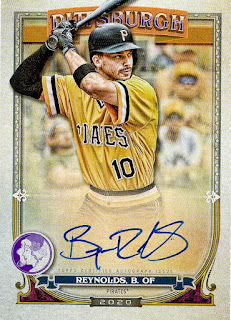 Speaking of alter identities, this 2020 is the Gypsy Queen logo swap parallel. 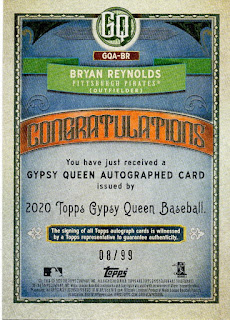 It's a far stretch from my nearly 200 McCutchen autographs, but this is my 9th autograph of Mister Never Die Bryan Reynolds.
Posted by Collecting Cutch at 6:16 PM