Lost Cards from the Lost Collector

A few weeks ago I received a 4 card PWE from AJ at The Lost Collector.  The same day I received that package I sent him a package containing an Andrew McCutchen autograph Tier 1 Yankees card because he commented "I hope to get one someday" or something like that.  Well I had a double so I sent it his way.

Then in the middle of spring cleaning, I lost the location of those 4 cards before I could scan them in.  While preparing to send some packages to go out next week, I found them. 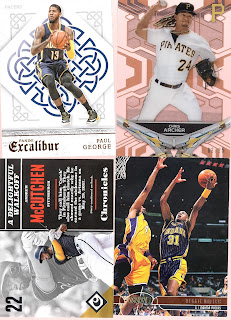 AJ hit my two main basketball player PCs with a Paul George and Reggie Miller.  He also included an orange Chris Archer 2019 Tek numbered to only 25 copies.  Sad news came out yesterday that Chris Archer is shut down for the 2020 season (if there is a season).  That 2018 trade that sent Glasnow, Meadows, and Baz to the Rays looks worse and worse every month.  AJ also included a 2017 Chronicles base card of Cutch.


Today I got ANOTHER PWE from AJ with even more Reggie Miller cards.  Sweet!!!!!  Of these 7 cards, 6 are brand new to the collection.  Only the All-Star card in bottom left was already in my collection.  I love the fact that he included both the cardboard and actual sticker of the '96 UD Stickums. 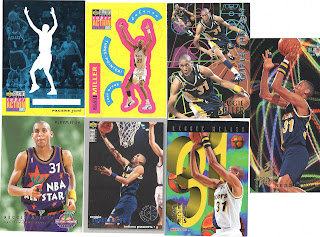 AJ hit up some more PC additions with a base card of Josh Bell 2020 Donruss (I am trying to put together the rainbow for the Cutch name cameo on the back).  The highlight though is that bright yellow retail exclusive 2020 Donruss of former Pirate and NJ born Charlie Morton.  Before being traded to the Phillies, I had every non-1/1 Charlie Morton card made.  I really need to up my Morton game for releases in 2019 and 2020. 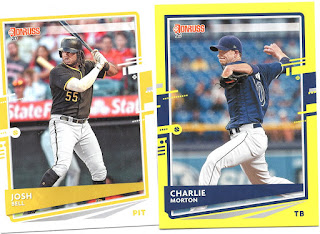 AJ thank you so much for such an awesome pair of envelopes.

Stay safe everyone and Keep Collecting.
Posted by Collecting Cutch at 7:58 PM