Up first is Daniel from It's Like Having My Own Card Shop.  Daniel sent me a PWE of 2 cards and 1 coin he had set aside for me for a long time. 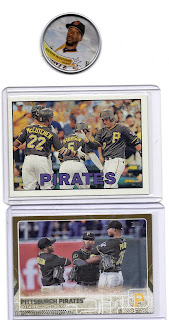 He also sent me the 2016 Heritage Pirates card that shows a celebration between Cutch, Josh Harrison, and Aramis Ramirez.  I just had a conversation with my brother about how good that 2015 team was and if there was ever a need to push the chips all in at the deadline it was that summer.  A pitching staff of AJ Burnett, Gerrit Cole, Francisco Liriano, Charlie Morton, and JA Happ should have gotten more than 9 innings in the post season.  Unfortunately they (again in the Wild Card) ran into someone who was pitching at elite level when they faced Jake Arrieta and his sub 1.00 second half ERA.  The previous year they ran into 2014 Madison Bumgarner.


Next Up is Johnny from (one of his hundreds of new blogs) Johnny's Trading Spot.  Johnny sent me this Honus Bonus Andrew McCutchen in exchange for a trio of Braves cards I had for him (2 Freddie Freeman 1/1s from Honus Bonus and a 5x7 John Smoltz Gold/10).  Unfortunately, Johnny's postmaster never put the package in his mailbox, but marked it as delivered.  Evidently this is an ongoing issue with his address so next time I am going to have send him something big and make sure it's marked as signature confirmation. 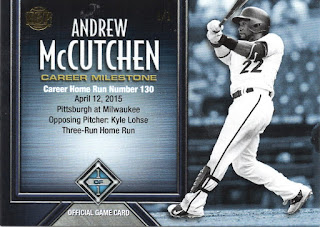 Thank you for this card Johnny.  It's odd that it features Kyle Lohse as I also have career Home Run #110 which was hit off of Lohse.  In his career Cutch hit 3HR off Lohse so I will need to find the other to complete the Lohse rainbow. Lol!


Finally we have Marc from Remember The Astrodome who sent me over some much needed Clemente and Cutch cards.

With the orange parallel I now have the complete rainbow from Big League Baseball.  More details about the Clementes will be available soon on my Roberto Clemente centric blog, Chasing 3000.
Thank you Marc for these awesome cards!

Posted by Collecting Cutch at 12:55 PM