Karate Kid Week: a tale of 2 One of Ones

I noticed that I have been showing off a lot of Phillies cards recently.  That makes sense because his current team plays in Philadelphia.  I think I'm not alone in saying this, but I will always remember him for his Pirates days and for making the Pittsburgh Pirates relevant again.

From 2013-2015, the Pirates had the 2nd best record in all of baseball.  Unfortunately the St. Louis Cardinals had the best record in those 486 games and the Pirates were forced to host the one and done Wild Card Game for three consecutive years, winning it in 2013 and losing in 2014 and 2015.

2015 was the last year the Pirates would reach the post season.

Just before the 2015 All Star Game, the Pirates walked off the Cardinals to prove they would remain relevant through the season.

This year is a shortened season, but the Pirates have a good shot at staying competitive if their pitching can hold up.

It feels like forever since 2015 happened and I was looking at my 2015 cards the other day because of this pair of 1/1 Archives Active Player Signature buyback autograph. 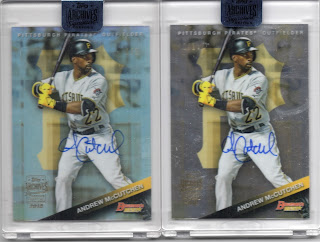 They look very similar and both don a 1/1 stamp on them.  The card on the left is a Refractor and the card on right is the base.  The original card was a 2015 Bowman Best.  I like the design of this set with the bold team logo in the background.

All week long I am going to be showing my Bowman Best 1 of 1s.

This week's posts will be all about the Karate Kid and that amazing theme song. I always associate the Karate Kid as a summer movie.  I remember when I was younger my mom would baby sit my cousins the last week in July and we would always have to take them to their karate lessons.  After their lessons we would eat macncheese and watch Karate Kid, 3 Ninjas, or TMNT.  I never learned karate myself, but for some reason always get nostalgic about karate movies in the summer.

To tie in my sudden memories and nostalgia, I wanted to spotlight a song that to this day I listen to at least once a month at work because it gets me amped up.

I'm kind of in a collecting funk lately because nothing new is exciting to me, but I have what many consider the best Andrew McCutchen collection on the web.  Why not show off a bunch of Bowman Best cards I haven't looked at for awhile?
Posted by Collecting Cutch at 8:57 PM