Over the weekend sales of the McCutchen SP went from $60 to almost $400 in less than 24 hours.  It was absolutely insane to see the hype and frenzy that surrounded that card all due to ESPN, Cutch, and Dick Allen's tweets.

I never put much into social media influencers and thought it was all a scam, but damn if I didn't see something like it first hand.

The average price of the cards at their highest selling point was almost $275.

For
A
Card
That
Comes
1:7 Packs 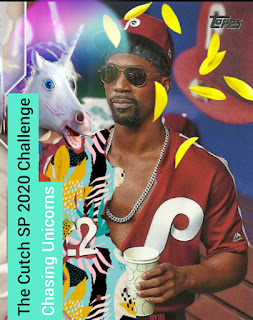 Rather than use that money to be caught up in the here and now, I used it to only buy Cutch cards I needed from COMC, eBay, sportlots, and artist sites.

Over the course of the next week (I'm guessing) I will show off the cards and items I bought during that 24 hour frenzy.

Some of them I have been after for a LOOOOOONG TIME.  I will provide screenshots of the receipts too.

One of the cards is a unicorn I've been chasing for 7 years!

Now let me preface and say that I overpaid for some of these cards.  This isn't how I normally collect, but I wanted the challenge to be genuine and only purchase cards over the weekend of the frenzy.

The first batch came today and it's a pair of 2020 Topps Series 2 parallels. 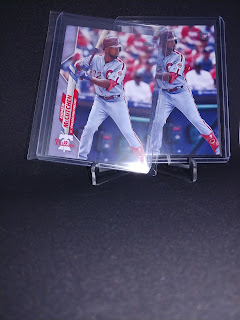 On the left is the Father's Day variant numbered to 50 copies.  I really like the baby blue color on this card in particular because it matches up nicely with the Powder Blue uniform of the Phillies.

Speaking of powder blue uniforms, I also got the vintage stock and logo parallel. 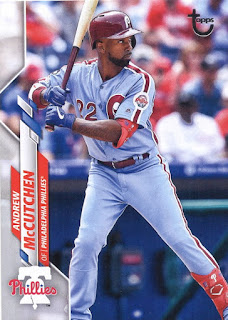 This parallel is numbered to only 99 copies.

Posted by Collecting Cutch at 4:18 PM