The team suffered a second half collapse which ultimately lead to another losing season, but they brought in Derrek Lee (and Ryan Ludwick) at the deadline.  This was the first sign that the Pirates were willing to add payroll if it made sense.

Derrek Lee got very few Pirates cards as he was playing in the Topps monopoly format (Post Upper Deck, pre Panini getting back in the game) and Topps wasn't at the level they are now where they produce 10-20 color parallels of every release. 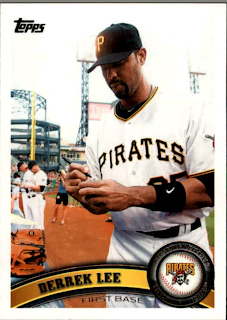 The official photo from Getty Images can be seen below. 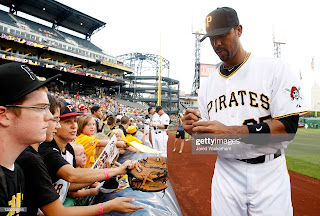 I tend to look at the Topps Archives retired players for Pirates autograph cards that weren't available when they played for the Pirates.  With only 2 releases (2011 Topps Update and 2012 Heritage) there wasn't a lot of options available to get a Derrek Lee Pirates autograph. 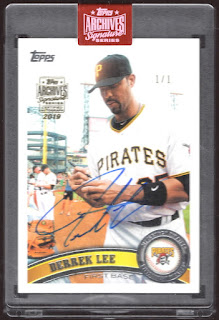 I'm happy to say that I am the only one that can state that claim.

Posted by Collecting Cutch at 5:58 PM