Growth as a collector

What defines someone Supercollecting a player?

Is it a percentage of total cards produced?
In this overproduced era of parallel options it is nearly impossible to collect ALL the cards of a modern player.  Prior to 2015, I was pretty successful with supercollecting Charlie Morton.  I had 1 of every card produced (including parallels) except 1/1 printing plates.  Of course the number of releases (and thus the parallels) that Charlie has appeared in since 2015 has basically tripled.

I still consider myself a supercollector of Andrew McCutchen and yet I only have half of the cards produced due to all the parallels and printing plates out there.

I never considered myself a supercollector of Gerrit Cole, but I do have 300 unique cards of the former Pirates ace.

I still consider myself a supercollector of Charlie Morton and yet I have only sought out base cards since his departure from Pittsburgh.

With the 2019 year coming to a close and 2020 quickly approaching I have decided that I am NOT going after every parallel produced of Cutch.  Similar to my stance I took with Charlie Morton, I will always like cards of Cutch and Ground Chuck more in Pirates uniforms, but not put premiums on seeking out cards of my 2 favorite modern athletes in Astros, Rays, Phillies, Giants, or Yankees uniforms.

This will hopefully allow others to help out with needs for my PC too as very often I hear "don't you have every McCutchen card?" or "what are your needs?"

I am growing as a collector and in doing so I am shrinking my immediate mindset upon a new release of "get them all immediately".

I chose to show off this trio of 2019 1984 cards to show my transition.
Pictured are the box topper, base, and mini. 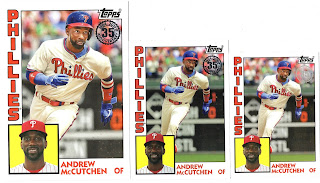 Despite not being numbered, the minis have a print run of only 13 copies. 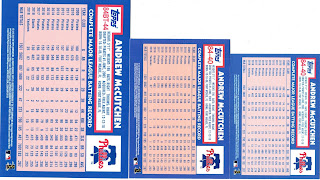 So while I will be growing as a collector, future releases will be shrinking.

Stay tuned as I show off some of the craziness I picked up this year that has been drafted in blogging limbo for months.
Posted by Collecting Cutch at 5:25 PM