I was blessed by a surprise gift from Chris at the blog, Nachos Grande.

I am not sure if Chris is aware of this, but whenever I see his blog title pop up in my reading list I think of this:

Anyway, Chris sent me this package in exchange for the prize pack and Cutchmas gift I sent his way. 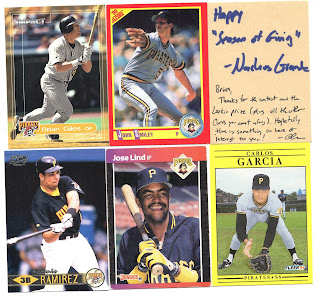 Chris sent me a lot of cards ranging from the 90s to current team.  Brian Giles was acquired for a relief pitcher (Ricardo Rincon) on the downside of his career and went on to have a very nice career.  Aramis Ramirez could be a 1st ballot Hall of Very Good candidate next year.  Jose Lind won a gold glove the same year he committed an error in the 9th inning of Game 7 of the NLCS.  The error ultimately lead to 20 years of losing records.  Carlos Garcia was with the organization for nearly those 2 decades of futility. 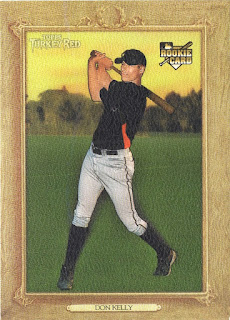 I completely forgot about Don Kelly playing for the Pirates.  He just got hired to be the Pirates bench coach for the 2020 season.  The most notable thing I know about Don Kelly is that he married former Pirates 2nd baseman's sister.  Carrie Walker, sister to Neil, became a professional womans basketball player. 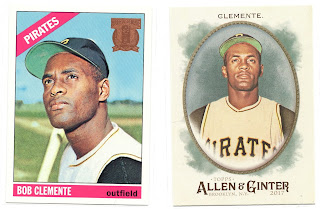 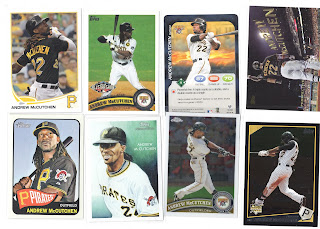 And to wrap things up an octaset of Cutch cards including a 2009 WalMart black card.  I stated I wanted to get more copies of Cutch's 2005 Topps Update and 2009 Topps Update cards for 2020.  Chris gave me a head start towards that goal.


Thank you for the surprise return package Chris.
Posted by Collecting Cutch at 7:48 AM