I thought it would be fun to show off some cameos of Cutch on cardboard in a new monthly segment called Cutch's Cardboard Cameos.  Alliteration is so much fuuuuuuun.

Last night, Rich Hill was pitching an absolute gem against the Pirates throwing 8 perfect innings.  Trevor Williams and Felipe Rivero shutout the Dodgers through 9 innings as well though.  In the 9th inning Logan Forsythe had a leadoff error to Jordy Mercer to eliminate the perfect game, but the no hitter was still in tact. After a sacrifice bunt by Chris Stewart, Hill got Jose Osuna and Starling Marte to retire in the 9th.  Juan Nicasio shutout the Dodgers in the top of the 10th and Rich Hill went back out to the mound for the bottom of the 10th since his pitch count was still under 100 pitches.  Josh Harrison lead off that inning and on a 2-1 pitch launched a ball just over the left field wall for the game's 1st Pirates hit and game's only run.

JHay All F-ing Day!!!!!
(Click link to see other Josh Harrison cards I have shown on Collecting Cutch)

Josh Harrison will likely get a Topps Now card to celebrate the feat.  Harrison is no stranger to Topps Now as he has appeared on 2 other walk off victory cards.

The first one occurred last year when Topps initially labeled the card as John Harrison.  A lawsuit for the card broke out after being released as Josh and Topps corrected it by rereleasing a limited number of John Harrison cards.  The Johns sell for A LOT more money ($300+ as opposed to $15-). 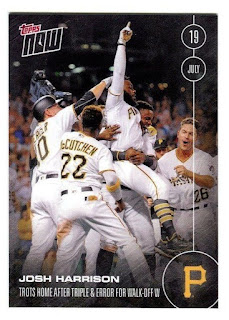 I thought I had owned this card, but after looking through my Topps Now collection I realized I didn't have it.  I have since remedied it by purchasing one for $15.
Posted by Collecting Cutch at 7:55 AM