I don't care if you're ugly, you're beautiful to me

Ever since Cutch's down year last year, people have been unloading his Just Minors autographs for pennies on the dollar.

And I am snatching them up like women after a clearance sale of LulaRoe (if any of you have significant others that buy LulaRoe you know exactly what I am talking about).

You may recall I grabbed a dual TriStar autograph of Cutch and Jason Heyward for under $8.  The auto had a Just Minors autograph on one side.

I've gotten some others as you may recall from my Biogenesis post.

This one may be my greatest coup though. 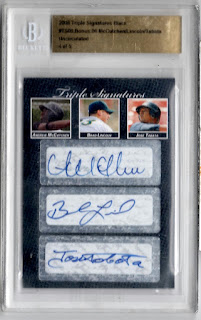 An uncirculated triple autograph of former top prospects Brad Lincoln and Jose Tabata.  This "beauty" is numbered to only 5 copies.  It ran me $20 shipped.

While it doesn't hold the same prestige as some of my other Just Minors combo autographs (Hamels, Price, Miller, Gonzalez) it has a lot of fond memories of rooting for the Pirates during the 2010 and 2011 seasons.

The Pirates under new GM Neal Huntington were pushing for a youth movement.  Fan favorites Freddy Sanchez, Jason Bay, Jack Wilson, and Tom Gorzelanny were all shipped out in 2009.  The Pirates had just called up Clutch in June 2009 and were hoping to see Jose Tabata, Brad Lincoln, and Pedro Alvarez graduate to the majors in 2010.  They all did.

Jose Tabata and Brad Lincoln both debuted together, the day after rookie phenom pitcher Stephen Strasburg mowed down 14 Pirates hitters in his 7 inning debut.

Tabata singled in his first at bat and looked like he would be the leadoff hitter of the future for the Pirates.  They quickly signed him to a long term deal, which has not worked out for the team.

Lincoln had ups and downs, but really came into his own as a relief pitcher.  He looked like he could one day be a future closer, but at the 2012 Trade Deadline he was traded for former Blue Jays top prospect, Travis Snider.  Lincoln fell apart with Toronto and would try to catch on with the struggling Phillies.

Like Tabata, Lincoln hasn't appeared in the majors since 2015.

Posted by Collecting Cutch at 3:02 PM