Triple autos for under $20

Last Friday I showed off all 125 certified autographs of Cutch in my collection.  That doesn't include my in person autographs I have from Spring Training and PiratesFest events I have attended.

2 cards I showed, but never spotlighted in my collection were a pair of Just Minors triple autos. 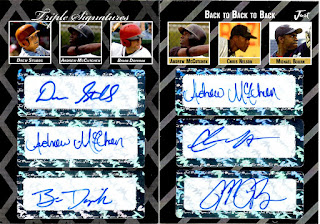 With the Arizona Fall League rosters announced today, it's important to remember that no prospect is a sure thing.

I had just snagged these triple autos /3 for less than $20 each a few weeks before that post. Michael Bourn is the second most accomplished player on this card.  He enjoyed success when he was traded from the Phillies to the Astros.  With Houston, Bourn lead the National League in stolen bases from 2009-2011 and won two Gold Gloves (2009 and 2010).  He would later be traded to Atlanta during the 2011 season.  The following year he would become an All-Star for the second time in his career.  He would become a free agent and sign with Cleveland for the 2012 season.  Things recently have fallen apart as the speedster with elite defense hasn't played in the majors this year.  Through 2016, Bourn amassed 23.4 WAR over 11 seasons.

Chris Nelson has posted a -2.4 over 5 years with the Rockies, Yankees, Padres, and Angels. He hasn't appeared in the majors since 2014. 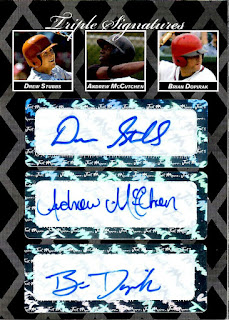 Drew Stubbs is the second most accomplished player on this card.  He has had a career WAR of 8.4 over his 9 year career with the Reds, Rockies, Rangers, Braves, Orioles, and Giants.  He has hit 92 homeruns and swiped 161 bags.  His best year occurred in 2014 with the Rockies when he batted .289 with 15 HR and 20SB.  He was viewed as a future 5 tool athlete while a prospect, but never could hit for enough average to stick in the lineup everyday.

Brian Dopirak never appeared in the majors and has been out of playing professional baseball since 2012.  Prior to 2005 he was the #21 best prospect according to Baseball America.  Over 10 minor league seasons, Dopirak hit 162 homeruns while slashing.279/.334/.482.  Those look like really good numbers, but Dopirak was a first baseman playing in the minors for teams that had Derrek Lee and Lyle Overbay/Edwin Encarnacion/Kevin Millar at the major league level.

Posted by Collecting Cutch at 3:25 PM