I can't come up with any clever titles for today's post.  So instead you're getting a bad pun as I troll.  My latest rock inspired pickup is a 2012 Triple Threads Onyx /50.  It ran me $4 which is a good price for a high end card with only 50 copies made. 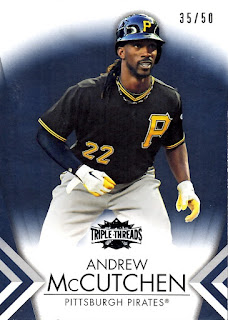 And here's the troll...
I hate the Brewers more than any other team.  It has nothing to do with the teams I watched growing up.  Robin Yount is one of the best players of his generation.  Gary Sheffield was one of my favorite players I got to watch play against the Yankees way back before he was traded to San Diego.

No my hatred of the Brew Crew has everything to do with Carlos Gomez, Ryan Braun, Yovani Gallardo, Rickie Weeks, Nyjer Morgan era...The list goes on and on.  I hated those Brewers teams.  Two guys I didn't hate though we're Prince Fielder and Corey Hart.  I actually liked both those guys a lot.

Happy they lost their first place standings.
If the Pirates can't win the division, let the Cubbies win it again.

Let's finish on a good note 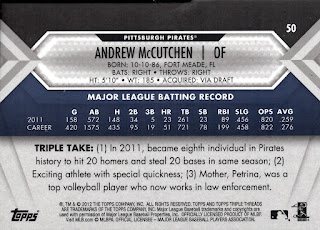 Did you know that Andrew's mother, who has sung the National Anthem at PNC Park a few times was also a top volleyball player and currently works in law enforcement?

The more you know...


Are there any teams you hate because of just a handful of players?

Posted by Collecting Cutch at 1:45 PM