I received a card yesterday from a friend who had attended a Pirates game earlier in the week, the Trevor Williams pitching gem game in fact.  Not only did he attend a great game in person, but he also got a pack of team specific cards to celebrate National Baseball Card Day.

This year Topps made their standard National release of a player from each team.  In addition they created team specific cards.  The Stadium Giveaways for each team feature 9 current players and 1 All-Time Franchise Legend for a total of 10 cards per team.  Some of the odd legends include Wade Boggs (Devil Rays) and David Ortiz instead of any of the other Red Sox all-time greats (Yaz, Williams, Fisk).  The Philadelphia Phillies recognized that they have no quality players on their team and released a 20 card legends set, not numbered.

Further details about both releases can be found here.

I have a National Release (with different picture) ordered and will probably receive it sometime later this week. 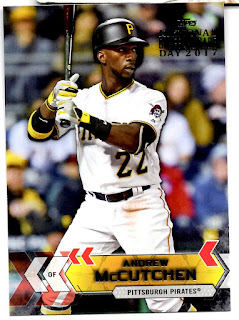 The card back has a different write up than the National Release. 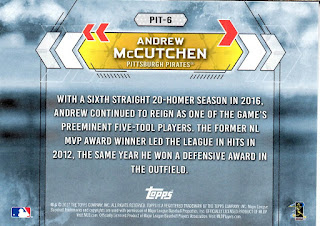 HOW DID YOU CELEBRATE YESTERDAY?
RIP ANY WAX?
Posted by Collecting Cutch at 11:29 AM