One of my favorite baseball movies is Soul of the Game.  It was a mid 90s made for HBO movie that starred Delroy Lindo as Satchel Paige.  It also featured notable Negro league players like Jackie Robinson and Josh Gibson.

Below is a clip from the movie where Josh and Satchel are trash talking each other and Satchel had the other fielders behind him walk off the field due to his confidence in getting Josh Gibson, the black Babe Ruth, out with no help from anyone else.
The story follows the history that lead to Jackie Robinson being the 1st black player to join a major league franchise.

There were a few quotes in the movie about teams trying to sign Satchel but Commissioner Landis wouldn't sign off on it.  In the opening credits it even has newspaper articles printed that Judge Landis banned Negro players from playing in the majors.

Another movie I watched yesterday was 42 starring the Black Panther himself, Chadwick Boseman as Jackie Robinson.  It wasn't until after Landis' death did baseball move forward with integration.


Yesterday there was an article that came out where former MVP winners were wishing to remove Judge Kennesaw Landis name and face from the award.  Barry Larkin, Terry Pendleton, and Joe Morgan, both black former MVP winners spoke up about it.  You can read the article here. 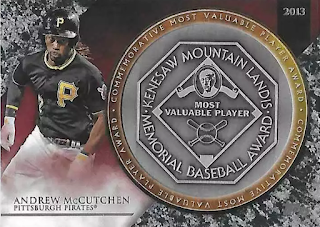 Above is a card with a manufactured relic designed to look like the MVP award.  It appeared in packs of 2017 Topps Update and shows the full name of Landis along with a picture of the first commissioner of baseball. 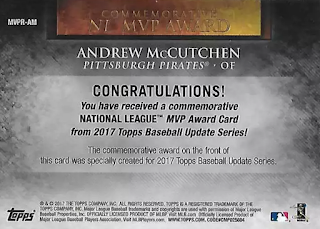 For a sport that has writers so involved in the history and preserving of the game, do you think that baseball will rename the MVP award and remove the Landis name from it?

Posted by Collecting Cutch at 7:09 PM