Bob Walk, Playboy, Steelers Football, and Walkoff Taters: this post has it all

Each year during the month of October, I show off only pink (and shades of pink like magenta, peach, etc) to help raise awareness of Breast Cancer, a leading cause of death for females in the United States.  For each (meaningful, non spam) comment left by those that follow the blog I donate a dollar to hopefully help at least one woman get a much needed mammogram.  Early detection is key!!!
If you want to make your own private donation please visit the National Breast Cancer Foundation.  There is a donate button on the main page and it only takes a minute of your time.  Every little bit helps.
I have focused primarily on cards that only feature Andrew McCutchen on the card, but in recent years have also featured cards with a cameo appearance (either being seen on the card or as a name cameo on the back of the card).  Last year I created Falco Files which discussed players that replaced (Shane Falco Replacements movie reference) on an active roster, number worn, or trade.  I will continue to utilize these styles of posts as we celebrate the 4th Collecting Cutch Save Second Base event (I am no longer counting my first run on the Pirates Treasure Room I did back in 2014.)
The World Series winner is getting closer and closer!!!! In only a few days we will have a winner to a season I had doubts of actually being played.
On another note, the Steelers continue to roll and remain undefeated.

Today I am going to look at Amanda Cerny 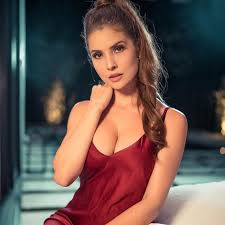 Amanda is an actress and former Playboy model.

She was the Playboy Playmate of the month for October 2011.

She has recently appeared in movies like The Bet.

She will be appearing in the comedy Deported available for streaming next month. And she has recently appeared as Violet in the Babysitters Film Series.  You may recall I talked about the first movie when discussing Samantha Weaving last week. 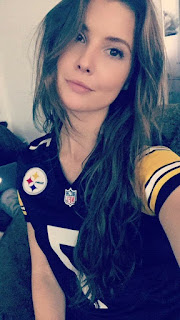 Amanda is from Pittsburgh so it is very likely that she will be joining me in rooting on the Steelers for the rest of the season.
As a matter of fact, the former Playboy Playmate was born just after a moment that is referenced on the back of an Adam Frazier card I own.
In 2017 Adam Frazier hit a walk off homer while batting in the leadoff position.  He joined only three other Pirates to accomplish that feat in the past 40 years.  One of them is Andrew McCutchen, making this a cardboard cameo.  The other two are Barry Bonds and Orlando Merced.  (Remember when Barry Bonds was a leadoff hitter?) 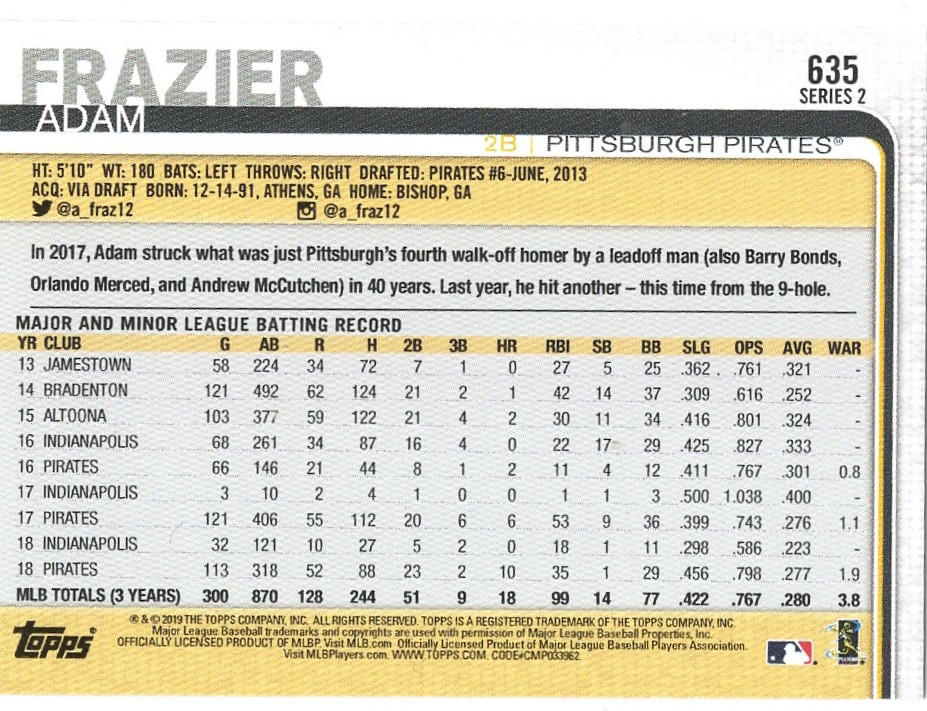 It is the last name mentioned, Orlando Merced, that I want to focus on today.
On the afternoon of May 25th, 1991 the Pirates were hosting cross state rivals, Philadelphia Phillies.  Former Phillies World Series champion and universally adored Bob Walk was on the mound for the Pirates.  He gave up 2 runs in 4 innings and got a no decision in his 59 pitch effort.  The game remained tied going into extra innings until Orlando Merced came up with one out and Curt Wilkerson on base.  He smacked a 2 run walk off homer from the leadoff position becoming the first to do it since Barry Bonds.
Merced would be the last Pirate to hit a walk off homer from the leadoff position until Andrew McCutchen did so 18 years later in 2009. Adam Frazier joined the list of Steel City leadoff hitters in 2017 when he smacked his first walk off homer.
Posted by Collecting Cutch at 8:42 AM

Email ThisBlogThis!Share to TwitterShare to FacebookShare to Pinterest
Labels: Amanda Cerny, Save The Boobies, SaveTheBoobies